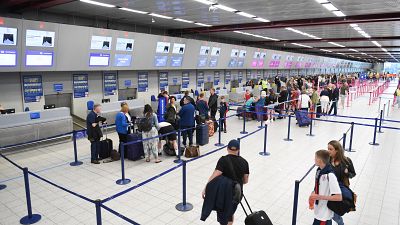 Five million UK residents could find themselves excluded from European holidays this summer due to a bureaucratic technicality.

The EU is now using a vaccine certification scheme known as the EU Digital COVID Certificate (EUDCC), which when scanned at airports and borders verifies the traveller's vaccination status and allows them to enter the country.

However, only those given a dose of vaccine approved by the European Medicines Agency (EMA) will be allowed to use a EUDCC, a problem for some Brits who have been given AstraZeneca.

Over 70 million doses of vaccine have been administered in the UK, but 5 million of those are the version of AstraZeneca known as Covishield, manufactured by the Serum Institute of India.

Covishield is chemically identical and provides equal protection to the AstraZeneca vaccine but is manufactured in India.

The revelation comes amid announcements that European countries are subjecting Brits to extra measures due to fears over spread of the Delta variant. Italy, Spain, Portugal, France, Germany and Mala have all added extra testing and quarantine measures for British travellers.

The Covishield version of the vaccine is still as effective as any other AstraZeneca jab, but this bureaucratic oversight could leave millions of fully vaccinated people unable to travel.

The EMA has not approved Covishield and, although the British government has used doses manufactured in India, UK and Europe under the same name, when presented on the digital NHS app in airports the brand will be unrecognised by the EUDCC gateway.

How can you find out which vaccine you were given?

What is the EUDCC?

The EU’s Digital Covid Certificate gateway is a system which went live across the EU on 1 July, although some countries were already using the app in June. Countries who weren’t ready for 1 July have until 12 August to gradually implement it.

Previously known as the digital green pass, the EUDCC consists of information about an individual's vaccination status, test results or recovery status from COVID-19.

Presented as a QR code, the traveller can choose to carry either a digital or paper certificate.

Talks are ongoing to integrate the US into the app. It is expected the NHS app for UK residents will also be recognised.

Airlines have warned that the EUDCC could cause chaos for travellers due to an uncoordinated approach by countries.

The technicality, which could leave Brits stranded at airports, is due to the lack of approval from the EMA for Covishield. An application has never been made for approval of this vaccine by the EMA.

The EMA has approved Pfizer-BioNtech, Modern, Johnson & Johnson and Oxford-AstraZeneca manufactured in the UK and EU.

However, despite this some countries have already said they will accept those vaccinated by Covishield.