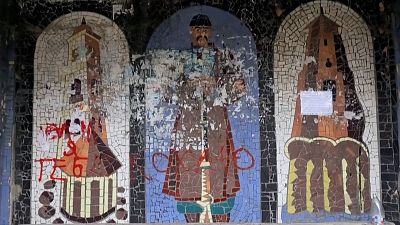 Soviet mosaics can be seen everywhere in Ukraine. They are in big cities and small regional centres, on major buildings and even bus stops.

They began to appear in Ukraine in the 1960s under the leadership of Leonid Brezhnev and were often used as a means of Soviet propaganda. The mosaics were hardly ever registered, had no indication of their creator, and were generally perceived as decoration for houses, hospitals, factories or schools.

Like socialist art, the mosaics were used to spread the soviet ideology, depicting the perfect lives of peasants and workers, while celebrating national heroes and the strength of the Communist Party.

Despite the ideological aims, some artists used mosaics as an opportunity to create poetic images, experimenting in style and representing Ukraine.

After the collapse of the Soviet Union in 1991, the mosaics were largely neglected and hundreds of them were destroyed by the new owners of the buildings. Vandalism (and time) also played a part in their demise.

Today, it is impossible to say how many Soviet mosaics are in Ukraine, or to register how many were destroyed.

Art historians and regular citizens across Ukraine have begun to realize the role of Soviet art in the country's history and are now trying to preserve the remaining mosaics.

At Kyiv's bus station, a group of artists and volunteers are working on restoring mosaics.

"This is a very expensive artwork because it's very hard to make and includes expensive elements. These days, no one creates such things, especially in Ukraine. That's why it should be saved," explains artist Inga Levi.

"I have free time. Why not do it? If not us, then who would do it? The building owners told us they would keep the mosaics only if we restore them, that's why we have decided to start this work," adds Daria Denenberg, a volunteer helping to restore mosaics in Kyiv.

To learn more about the mosaics and the effort to save them, watch the video above.

Watch this incredible footage of a jetpack-flying medic

Watch this man tightrope walk across France's most iconic landmark