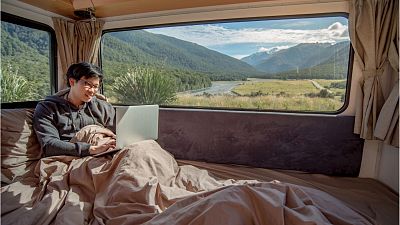 Some people have been remote working for months without their bosses' knowledge   -   Copyright  Getty via Canva
By Ruth Wright  •  Updated: 04/07/2021

Working from home 24/7 is difficult for many workers. Looking after kids, living with housemates in a cramped space and missing colleagues are just a few of the difficulties. But for those who travelled frequently pre-pandemic, they have felt the effects of lockdowns even more deeply.

Some have found a crafty way round this. Travelling while still working. Before most offices had closed, some big companies, like Facebook and Google, told staff to work from home full-time. Whereas others have still had to go into offices. For staff at these companies, some felt they had no choice but to go away without getting permission from their bosses first.

Some workers are so opposed to returning to the office full-time, they’d rather quit. Another survey found that 90% of millennials and Gen-Z do not want to return to full-time office work post-pandemic. Could some of the respondents already be working abroad? Or know they want the flexibility to go away in the future?

We spoke to four secret digital nomads to find out how they do it, what they get from it and what advice they’d give to an aspiring digital nomad - secret or otherwise.

I spent the first few months of the pandemic working from home in Zurich, where I live alone. I was really strict on following all the rules. I barely saw anyone. I did all my grocery shopping online. I did all my exercise in my tiny apartment.

Then I went on holiday to Mexico, for a break from work. I met people there who were remote working and I instantly felt jealous. They had such a good work-life balance and they didn’t seem to get stressed by work at all.

Whereas for me, within two days of being back at work, in isolation, it was like I’d never been on holiday. I was back to being stressed. I knew there was no point in asking my boss if I could work from abroad. He has young kids so he’s really paranoid about hygiene and staying safe. So I decided I just had to go for it, for my own mental health. I persuaded a gym buddy, Matthias, to come with me. Neither of us ever put our cameras on during calls anyway. So as long as there’s no background noise that would seem weird, no one can find out.

Since then we’ve worked from Mexico, Brazil and Italy. I don’t want to say exactly where. But trust me, it’s been so much fun. We work most of the day then go kitesurfing, if there’s wind. In the evening we got take-out when restaurants were still closed. But now we go out for dinner or eat with people where we’re staying.

The lowest point was when I caught COVID in Brazil. We went to a party in a favela a few days after we arrived. In hindsight, it was a dumb idea. Tons of people dancing and singing, it was kind of inevitable that someone would spread COVID. I felt ill for about 10 days and I had all the symptoms you hear about. It was stressful because I couldn’t take any time off work, even when I felt really sick. I got pretty worried when I had a really high fever, but I didn’t want to risk getting worse by going to a local hospital. So I just decided to ride it out. At least I’ve had the antibodies since, so that’s reduced my worries even more about travelling around.

Do I have any regrets about working abroad secretly?

Not at all. Everyone I know back in Zurich has been so miserable in lockdown. If you have the choice, why put yourself through that?

I’ve been working abroad with Frederick for most of the last 8 months. My boss and colleagues have no idea. Or at least, if they do, they’ve never said anything to me.

Even my parents don’t know I’m not in Switzerland. They’re getting older and I just don’t want to worry them so I’ve just never told them. They’ve been isolating so they’ve never asked me to go and see them.

In Brazil we got an apartment. We would work from there during the day then go kiting in the afternoon. I schedule all my work meetings in the morning then they’re out the way.

I was the same as Frederick. I hated being in lockdown at home. I’m really into fitness and I hated not being able to go to the gym. Whereas while we’ve been away we’ve been able to go kiting, surfing, running on the beach, whatever.

If anyone thinks we don’t work hard just because we’re travelling at the same time, they’re wrong. I’ve actually been promoted while I’ve been away. It’s not affected my productivity at all. Of course, I’m creative with how I use my time. I sometimes work late into the evening if I’ve taken time off during the day to have a long lunch or travel to a beach. But I’m happy to do that.

I think the pandemic has shown us that workers are happier when they get to choose their hours and location. Happy people do better work. I really hope companies take notice and change their policies as offices reopen.

I usually live in Berlin. I went on holiday to Tenerife in February to escape the winter and did a few days remote working from there, to save on my holiday days.

I was nervous before I went that I’d be found out. But it was actually super easy to hide it from my boss and the rest of the team. Everyone’s in their own world. We barely ask each other “how are you?” now that we’ve all been working in our home offices for so long. So no one asked how I was, so I didn’t have to lie.

A couple of weeks after I got back to Berlin, a friend was going to Fuerteventura and invited me to go with her. There was no point in asking my boss about remote working because even if she wanted to say yes, she couldn’t. My company have a policy that no one can work from abroad.

So I just decided to go for it. I knew I couldn’t always have my camera off on calls because I usually have it on. So I planned ahead and took jumpers and winter clothes with me so I could wear them on calls. I took them off straight after of course - it was 20 degrees outside.

The thing I didn’t plan for was getting a tan. You can’t cover up your face with winter clothes, you know? I think it’s been really obvious I’ve spent all weekend in the sun on some Mondays. But maybe it’s not as obvious as I think as no one’s ever said anything.

I’m still in Fuerteventura now. I’ve got really into surfing. Everyone does it there because there’s so many amazing beaches. I did a few lessons when I was first there but after that, I just went out with friends to practice. There’s tons of digital nomads working from here so it’s really easy to make friends.

I have a busy job so I have to work from 8.30am-5.30pm. But that still gives me a few hours to surf afterwards. Then we usually head for drinks and tapas. I’ve always rented apartments that have a balcony or outdoor space, so I can at least sit in the sunshine while I work. Oh and good Wi-Fi. That’s super important.

That’s probably my top tip to anyone wanting to work from abroad without letting people at work know. If your calls keeping cut out, they’re going to get suspicious. Landlords will always tell you it’s really fast internet, of course. But don’t rely on them. Go to the apartment yourself and try a WhatsApp call on the Wi-Fi and check it for yourself. My other tip is don’t stress! If you’re a good employee, they can’t get that mad. You’re just prioritising work-life balance, after all.

I usually live in The Netherlands but I took off in my campervan in October 2020. I’d already had the van for a few years but I hadn’t used it much, even though I’d travelled a lot.

I work as a research consultant for NGOs. I’ve been self-employed for the past few years but I had a desk in a co-working space in Amsterdam. Of course that closed last year. So I’d been working from my apartment since but I started getting really antsy. I usually travel at least once every few months so I was really missing it. My boyfriend and I were arguing all the time and that’s really not like us.

I knew something needed to change so I decided to take off in my van. As a couple, we decided we needed a bit of time apart and he would join me later. We have an open relationship so that probably makes it easier to be apart. Since October, I’ve been all over Europe. I’m in Portugal right now.

I usually stay in free camping spots to save money. But now that some have reopened, I’ve been in proper campsites the last month or so. My daily routine is wake up, do an hour of yoga (I’m also a yoga teacher) then open up my laptop while I’m having breakfast in the van. I work for a few hours then head somewhere for lunch and maybe for a swim if I’m near a beach. Then work again until the evening. Then I’ll often have dinner with friends who are also staying in vans nearby. I usually stay put in one spot for a month. It’s nice to feel a bit settled somewhere.

I’m not sure if my clients know I’m not in Amsterdam. I think a couple of them do, but they just don’t care. As long as I respond to their emails and send them the work on time, why should they care?

Life on the road isn’t always what it looks like on Instagram, of course. Things have gone wrong with my van a few times and getting it fixed when you’re not near a big city can be really annoying. I speak Spanish so I’ve picked up Portuguese pretty easily. Obviously it helps to be able to communicate in the local language. I miss friends from home. But I meet new people every day so that helps to keep me distracted. I’ve met so many great, like-minded people.

My boyfriend is out here with me now and we definitely argue much less. We’re still in a small space together, but there’s a sense of freedom that comes with van life. I just couldn’t find that in my apartment.

Man avoids travel restrictions by dressing up as his wife

What is base jumping? We find out more from the top of Mount Brento

Here’s where you can find the best baguette in Paris