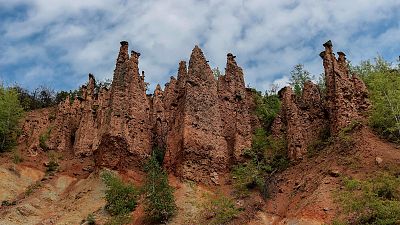 Anyone craving adventures that take them truly off the beaten track will undoubtedly find what they’re looking for in Serbia. Travelling in the vast rural areas of this country can mean anything from scrambling up pretty mountain paths to admiring medieval art in secluded monasteries, tucking into huge plates of smoky grilled sausages or bedding down in a remote fairytale village.

The rivers, lakes and national parks are ideal places for adventure sports and wildlife spotting, and no matter which region you choose to explore, the landscape’s wild beauty is bound to give you goosebumps.

With its canyons, deep green forests and glistening lakes, Serbia has countless picture-perfect spots worth visiting just for the views alone. For many travellers, Uvac Canyon is at the top of that list.

Limestone cliffs tower over the dazzling green water of the Uvac River, which twists and turns into spectacular meanders. A gentle boat cruise is the easiest and most relaxing way to take in the canyon’s serene beauty, but for the best view of the river’s curves, you need to get up high to one of the lookout points. Choose a boat tour that includes a visit to the Molitva viewing station, where there’s a small wooden platform offering the ultimate panorama of the site.

Just as memorable and equally photogenic is an intriguing natural phenomenon in Serbia’s south: Devil’s Town (Djavolja Varoš). Here you’ll find a series of 200-odd tall, spiky stone formations, which according to legend are actually petrified wedding guests, turned to stone as a punishment for attending the wedding of a brother and sister. Listen out for the distinctive sound the wind makes as it whistles past the stone figures – locals say it’s the devil whispering. Visit after dark if you dare, when the site is illuminated to eerie effect.

Western Serbia’s Tara National Park is a truly beautiful corner of the world, thickly forested, crisscrossed with mountain streams and rivers, as well as being rich with wildlife.

It’s a major draw for animal lovers, as the park is home to a large population of brown bears, which can be spotted at their feeding grounds on guided tours. Experienced rangers bring you to wooden watching hides deep in the forest, where you have to wait as quietly as possible until the bears show up. Meanwhile, other creatures roaming among the trees here include deer, wild boar, wolves and wild cats, with golden eagles and peregrine falcons often seen overhead.

Tara National Park is also a hotspot for adventure sports, many of which are based in or around the park’s mighty Drina River. One superb kayaking route is the 15km stretch from peaceful Lake Perućac to the Little House on the Drina, a tiny cabin perched on a rock in the middle of the water. Each summer, the atmosphere here turns raucous as Drina Regatta brings thousands of thrill-seekers to float down the river on boats and rafts as BBQs, concerts and parties take place on the banks.

Serbia doesn’t often get credit as a top biking destination, but there are some fantastic journeys to take on two wheels along the Danube and through Djerdap National Park. The Danube Cycle Path, Serbia’s key long-distance route, runs through the country from the Croatian border to the Bulgarian border, via Novi Sad, Belgrade, villages and national parks.

Visiting Serbia’s Orthodox monasteries is one of the country’s most unique experiences. There are hundreds dotted across the country in various architectural styles and many are set in extraordinary locations. One of the most unusual is Crna Reka, which dates back to the 13th century. The monastery is built right into the caves of a steep cliff deep in southwestern Serbia, overlooking the gorges of Ibar Kolašin on the Crna River. The UNESCO-listed Studenica Monastery is Serbia’s largest and most famous, encompassing two churches that contain some of the country’s most treasured frescoes.

Finally, a tour of the countryside wouldn't be complete without a glimpse into everyday rural life, and for this, stopping at some of Serbia’s villages is a must. Sirogojno village in Zlatibor is a perfect place to start, as it’s partly an open-air museum showcasing traditional ways of life. For peace, quiet and lungfuls of fresh mountain air, Donji Taor is another great choice, plus there are beautiful waterfalls to visit nearby.

No matter which village you choose to stay in, don’t leave without sampling some hearty, home-cooked Serbian dishes. A traditional favourite is Ćevapi, a deliciously spiced and seasoned sausage meat, usually eaten with flatbreads and a red pepper sauce. Burek, a baked pastry filled with meat, cheese and vegetables is the perfect breakfast to fuel you for the next day’s adventures.

What does the most expensive cheese in the world taste like?

Long-haul bookings are bouncing back, but why not look closer to home?

Madrid: Why the Spanish capital is a foodie's paradise