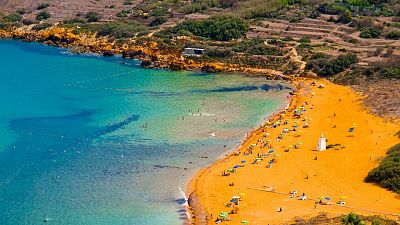 As many countries coordinate travel lists and vaccine passports, trying to book a decent trip across Europe might prove to be a challenge this summer.

This could be better for your holiday plans than you might realise - avoiding overtourism may be the driving force in getting us to explore parts of the continent we weren’t aware existed.

In this case, we’re talking about Europe’s thousands (yes, thousands) of secret islands. Tranquility, culture, cuisines, all in earshot in your usual favourites.

Here are some of the most exceptional secret islands in Europe.

Lastovo lies somewhere between the northern tip of Puglia, and the southern end of Croatia’s famous island collective, the Dalmatian Coast.

Birdseye views of this holiday spot would have you believe it sits comfortably within the shorelines of the Bahamas. It’s almost too spotless to not be in the Caribbean.

Despite being the largest land mass of the coast’s 47 islands and islets, it houses just one hotel, the Triton, boasting sea views and a widely-acclaimed beachside restaurant.

All the more intriguing for tourists keen to catch a glimpse of Europe’s starriest skies (scientifically-confirmed, no less), and get in on some real sun.

Scotland is home to over 790 islands, coming in second to the thousands of Nordic and Scandi clusters across the continent.

These range from tiny patches of uninhabitable land to vast expanses like the Celtic wonderland of Skye. Not too far from Skye sits Oronsay Island, a mythically charming, undiscovered nature haven.

If you can time it right, the tides allow access from Skye to Oronsay Island via causeway, only adding to the mystique.

Dramatic landscapes make for excellent sightseeing opportunities, with cliffs and caves of up to 200 feet veering into an icy blue coast. Including the island in your next Highland holiday would be no mistake for the views alone.

An island-on-an-island, Gozo is considered by Maltese people to be the isle’s rural, culturally dense sister destination. It’s reachable by ferry in just 25 minutes from Malta’s main northern port.

The mythical finds of Gozo’s paved streets will have you enveloped in Baroque architecture leading to stalls that offer tasting sessions with local oils, wines, and breads.

Gozo is also a popular find with divers who relish traversing its many caves. The Blue Hole, a unique geological phenomenon that links divers through an underwater arch into the sea, is a highlight.

The smallest of Spain’s Balearics is increasingly familiar with tourists looking for a soothing balm away from the sucker punch of nearby Ibiza’s nightlife. Its white sandy beaches and amber sunsets make it the perfect place to escape the madness of the party island.

Most notably, its main beach, Illetes, takes the shape of a long strip of sand reaching out into the water, extending visitors into its fascinating, diverse marine life.

Tourists can expect to taste some of the best Mediterranean food of their lifetimes through the island’s assortment of local eateries. The cuisine on offer spans various price points, from tapas plates that pack a punch to seafood caught fresh from within the restaurant.

Engaging with the island beyond beaches is no fuss - Formentera is also very easy to bike around. Visitors can feel the full breadth of its offerings all summer long, from ancient lighthouses to its world heritage Posidonia seagrass prairies.

First established as an inhabitable space by a group of villagers, life in this seven kilometer stretch of land off the coast of the Riviera didn’t come to full fruition until the late 19th century.

Hilly ranges bleed into sandy coasts that attract boats of visitors in the summer months. Who could blame them, with highs of 30 degrees and water that cerulean?

Port-Cros National Park is the main draw for tranquil nature lovers, encompassing most of the island's mainland and preserved by the government down to every detail.

The EU is officially welcoming vaccinated travellers in summer 2021

Why this small, crowd-free country could be the perfect 2021 holiday

Why Annecy is the perfect getaway for social distancing