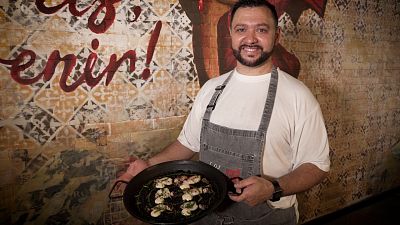 Chef Daniel Delgado sits under a larger than life mural of Lola Flores, the Cádiz native and iconic flamenco dancer, as he explains the role of cuisine in Spanish culture.

New Spanish hotspot, Lola Taberna Española aims to take its patrons on a culinary trip to Spain. Its interior imitates one that you could find in an eatery in Andalucia. Upon entry, a welcoming 'Hola!' greets the Spanish community into the taberna's relaxed atmosphere.

Chef Delgado explains that most of the people who dine in the Lola's Taberna Española have either been to Spain or are Spanish themselves. This is with no surprise as there are a large number of Spanish ex-pats living in Dubai. Understanding that his diners taste buds are tuned to Spanish cuisine, Chef Delgado strives to make his food as authentic as possible.

He uses ingredients imported directly from Spain. For the Black Ink Paella, the rice is imported from Valencia and the paprika from Castile-La Mancha's vineyard region.

Chef Delgado explains that the key to a good paella is to keep it ‘thin’. After cooking the rice in the stock, a thin crust should remain once the stock has evaporated from the dish. He has been cooking this dish since the start of his culinary career and has served it in every restaurant that he has worked in. He said, "year by year, I continuously try to improve the dish until it is perfect".

Delgados explains that this dish is ideal for sharing with friends and family. He said, "Sharing is a part of our culture. It is how we are raised in Spain. In my childhood house, we used to all get together to cook and to enjoy the gastronomy".

Delgados homely approach to food takes a heavy influence from his mothers cooking. He mentions that her paella is the best he has tasted to date. Now plating up his own ‘Black Ink Paella’, Delgado wants to give his fellow Spaniards a taste of home whilst over 5000km away in Dubai.

Traditionally, paella originates from Spain's east coast in Valencia, where it would be cooked using a wide shallow pan over a fire. Its name is taken from the regional dialect and translates to 'frying pan'. Due to its popularity, the recipe spread across all of Spain. Following that, the seafood special gained a reputation across the Mediterranean. Chef Delgado proudly explains that today Spanish food is now recognised around the world. He said, 'When you hear the word paella, you instantly know that it is a Spanish dish. It is one that people in the middle east have a healthy appetite for".

Bone selection is key to a good bowl of Pho