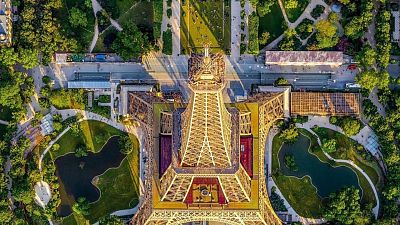 Paris is one of the most instantly recognisable locations on the planet. From appearances in films, television series and countless Instagram holiday posts, it’s hard to imagine there could possibly be an angle we haven’t all seen before.

The historical French city is home to so many iconic spots associated with history and romance, that it’s difficult to represent Paris without falling into cliches.

However a new book called ‘Paris from the Air’ by award winning photographer, architect and pilot Jeffrey Milstein manages just that by showing the city of love from a new ‘unimaginable’ angle.

Capturing the quintessential Parisian landmarks and views from above, Milstein intends to display the home of Coco Chanel and Marie Antoinette to readers in a completely new and breathtaking light.

Based on the ‘extraordinary’ quality of his work, Milstein was given rare permission to photograph the city from above to create his collection of uniquely stylised, birds-eye images.

Milstein, who has been featured in the New York Times, Paris Match and Vanity Fair flew in a doorless helicopter to capture some of Paris’s most emblematic sights, including the Tour Eiffel, Arc de Triomphe, Invalides, La Défense and the gardens of Versailles. His photos bring together modern and ancient Paris, in scenes both during the day and at night.

Publishers say that the book will be an ‘endlessly fascinating’ way for Paris lovers to study the city.

Although currently less due to COVID-19 Paris usually has 30 million visitors each year who go for a family holiday, city break or honeymoon.

Most tourists to Paris are European but France saw a 7.4 per cent rise in Asian tourists in 2019.

The tourism industry in France is huge and the country is hoping to target 100 million tourists in the future, Paris has 40 million holiday makers in 2018.