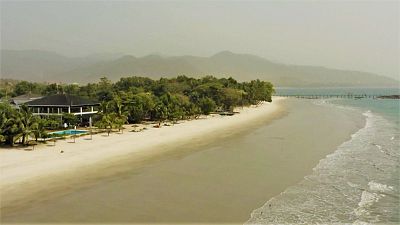 Sierra Leone is a forgotten paradise with its white sandy beaches and crystal clear waters.

For many of us, when we think of Sierra Leone, we think of the civil war, blood diamonds and conflict. But this destination deserves another look. It has one of the most beautiful coastlines in West Africa and incredible wildlife including over 11 species of primates and the rare pygmy hippopotamus.

Sierra Leone was once a holiday hotspot

In the 1980s Sierra Leone’s Freetown Peninsula was a high-end holiday destination that welcomed thousands of holidaymakers every week. Over 100,000 tourists from France alone visited the resort each year.

When the civil war broke out in 1991 Sierra Leone disappeared from travel brochures, the tourists stopped coming and now only a few ruins of the old pre-war holiday resorts remain.

The civil war ravaged the country for over 10 years and finally ended in 2002. At the end of the conflict it was estimated that almost two-thirds of Sierra Leone’s population were displaced and thousands of children needed rehabilitation and care before they could return home.

But in the last 20 years Sierra Leone has made enormous efforts to rebuild but luck was not on its side and from 2014 - 2016 Sierra Leone was hit hard by the Ebola epidemic and so tourists continued to stay away.

It’s now almost 20 years since the civil war ended and 5 years since the country was declared free of the Ebola virus. Though Sierra Leone has made great progress in becoming safe for visitors it has yet to entice tourists back in the same numbers as before.

The UK foreign office states that “Sierra Leone has taken significant strides following 4 democratic elections since the end of its civil war in 2002 and the political situation is stable.”

The travel advice given by the UK FCDO is now similar to many holiday destinations, advising tourists to be careful of pick pocketing and overt displays of wealth.

Where is the best area to visit in Sierra Leone?

Sierra Leone is on the south-west coast of West Africa, between Guinea and Liberia. It’s a 8 hour flight from Western Europe.

Its capital, Freetown, is on a peninsula in the west of the country. As the city you’re most likely to fly into, it’s lucky that the peninsula offers long stretches of quiet sandy beaches and the average temperature year-round is 28C.

A female visitor to the resort says, “You can’t see many beaches like this in the world. We’ve travelled a lot and we really, really like it here.”

You can’t see many beaches like this in the world.

All of the hotels along the resort are new and purpose built and hope to attract visitors from across West Africa and Europe.

Vinod Kumar Bahuguna, Director of The Place Resort, Tokeh Beach says the numbers of tourists have been growing steadily. He says, “We thought we would make profits in 2020, but unfortunately, COVID happened. But without the COVID-19, we would have had very good profits."

Though the beaches are quiet now, Sierra Leone is slowly regaining its popularity and so this hidden gem may not be hidden for much longer.

Watch the video above to see some of Africa’s most beautiful coastline.