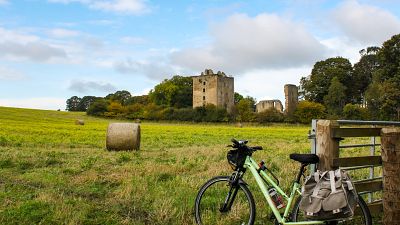 After months of confinement, a movement-filled holiday out in nature is the perfect summer adventure.

With travel rules still very uncertain, many Brits are planning to holiday in their home country this year. But that doesn’t mean you need to miss out on the walking or cycling holiday you’d dreamed of in France or Spain.

With nature and the outdoors becoming more important than ever in our daily lives in lockdown, long, meandering trips are the perfect post-lockdown balm.

These paths are all open to walkers and cyclists. Be a considerate visitor by following this advice.

Situated within the South Downs National Park, this walk is deceptively close to London and yet is tranquil enough to feel like its own little island. Running along white cliffs dotted with various rest stops to take in views of the English Channel, South Downs Way feels like a quintessentially British guide to its most famous coastal region.

There is something for everyone along the trail, including the Amberley working museum, a lively re-imagining of the South-East’s industrial past, and the Alfriston Clergy House, a rare glimpse into 14th-century architecture.

A former railway turned cycle and hiking route, this path offers a quaint slice of Somerset countryside, with some unique finds along the way. Many of the former train stations remain intact, with the Warmley station waiting room now transformed into a cafe, serving tea and coffee on the old platform.

An added treat is the River Avon which runs alongside the railway. It can be easily glimpsed along the path as trees part, allowing travellers to bask in its beauty as they head towards the end of their trek in Bath.

Another potential route surrounding the Bristol and Bath Railway Path is via the Kennet and Avon Canal towpath, doing a circular trip and further exploring the River Avon.

For more help planning your visit, you can visit the official website for Bristol and Bath Railway Path here.

A route filled to the brim with history, the Hadrian’s Wall Path is any historians’ dream trail. Built on behalf of Roman Emperor Hadrian between AD 122 and 128, its original purpose was to guard the wild north-west frontier of the Roman Empire.

Nowadays, the areas surrounding the Wall are home to various museums and settlements, jam-packed with artefacts and information galore about Roman Britain.

Walking the whole path would take 7 days, but the path is easily accessible if you prefer travelling a chunk at a time.

For info on planning your trip visit Hadrian’s Wall Official.

This 192-mile route has gained an almost mythic status amongst hikers and cyclists, for its charming origins and the incredible sites on offer at each part of the trail.

Devised by British fellwalker and writer Alfred Wainwright in 1973, he put a tab behind the bar at Robin Hood’s Bay, Whitby for those who successfully completed his walk in years to come. Despite the tab being long used up, the trail still has various rewards and wonders along the way, stretching across three national parks, all in one route.

For any budding geologists, the route allows travellers to track the changing landscapes and rock formations, from green slate in Honister to red sandstone at St Bees.

The route usually takes 2 weeks to complete on foot, and requires training prior to completing the trail.

For more information on planning your route successfully, you can visit the official coast to coast website.

A homage to the Great Western Railway, the Ystwyth trail is one of the most stunning ways to explore Wales’ coastal towns and landscapes - believed to be some of the most beautiful in the UK.

Starting in Aberystwyth, this path follows the banks of the Afon Ystwyth before dropping south along the Teifi river to Tregaron.

Along the way, travellers can take in the local art scene through the Ceredigion art trail, highlighting local arts and crafts to get involved in. In Tregaron, adventurers also have the opportunity to learn about Twm Sion Cati, a figure often described as being akin to Robin Hood in Welsh folklore, whose statue resides in the town.

The trail usually takes 6 hours to complete, but can be done over the course of a day at a more leisurely pace.

The West Highlands Way certainly isn’t a trial for the faint-hearted. But what it lacks in ease, it more than makes up for in its sublime sites. The UK’s tallest peak Ben Nevis dominates the skyline and you can lose yourself in the dark mysterious waters of Loch Lomond.

For travellers wishing to explore and roam the area more freely, surprising quirks and areas of interest dot the trail. Near the village of Balmaha, there is access to the magical island of Inchcailloch, which is home to a rich habitat of plants, trees and animal life, perfect for a keen naturist.

The West Highlands Way is usually completed from South to North, but there are various smaller sections which can be done separately.

For more help planning your journey, you can visit the West Highlands Way website.

This woman is recreating expeditions by forgotten female adventurers