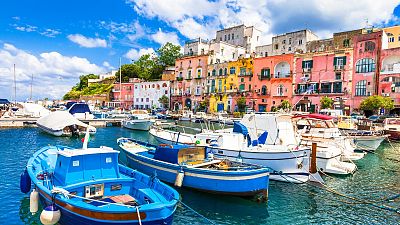 As coronavirus vaccine programmes gain pace across the continent, so too are hopes for the return of summer holidays in Europe.

Italy has announced plans to vaccinate all residents on the country’s holiday islands as a matter of urgency to help kickstart local economies dependent on tourism.

The move, backed by the country’s tourism minister, comes as Italian mayors call for the country to follow Greece’s example.

Italy’s Adriatic neighbour announced similar plans to vaccinate the inhabitants of all 69 of its islands to revive the country’s bedraggled tourism industry.

Italy’s plans aren’t without controversy, however, with popular tourist regions on mainland Italy protesting that, as bigger draws for foreign visitors, they are being left out in the cold.

Under current plans being considered, the populations of Italy’s smallest islands would be fully vaccinated by the end of April.

So, where will you be able to visit under the plans? Here’s our round-up of Italy’s best small island havens to escape to this summer.

There’s a reason why the world’s rich and famous flock to Capri. It’s the same reason why it was favoured by Roman emperors.

Superlatives fail to describe its grandeur; from its steep cliffs rising out of impossibly blue seas, elegant houses draped in bougainvillea and perfectly manicured gardens, not to mention its exclusive shops and restaurants. For a taste of the high life, Capri is definitely the choice for you.

When the grit and edginess of Naples proves too much, the island of Ischia is the usual go-to sanctuary to get away from both the heat of the city and the spectacle of Capri.

The largest of the Bay of Naples islands, the volcanic outcrop is a microcosm of what Italy does best: languid beaches, wholesome food and laid-back attitudes. There is a lot of ground to cover but make sure you take time to visit Ischia’s thermal spas for some much-needed rest and relaxation.

With its pastel-painted houses and sun-drenched, narrow streets, it’s a wonder that Procida is still one of the Bay of Naples’ best-kept secrets.

Usually swarming with visitors in August, the rest of the year, the small island is reclaimed by the locals. While beaches are in short supply, bars and restaurants, particularly around the main harbour of Marina Grande.

Like flotsam floating on the top of the Mediterranean, this archipelago of rocky islets off Sicily’s north coast are still bubbling over with volcanic activity.

Aptly named Vulcano is home to an active volcano and worth a day trip to wallow in its warm mud baths. Lipari, home to most of the islands’ residents, is a showpiece of treasures from antiquity while Stromboli, itself home to a volcano, is also where designers Dolce & Gabbana have their holiday home.

Another island chain off the coast of Sicily, the Egadi, or Aegadian, Islands are a cluster of three small volcanic islets. The trio remain one of Sicily’s best kept secrets to all but well-healed Italians.

These islands wrote the book on slow-paced life; there’s little to do but relax and unplug from the world as you satiate yourself with platefuls of local pasta, carafes of red wine and spread out on your own sandy cove.

Derived from the Greek and meaning “open sea,” the Pelagie islands are adrift from the rest of Italy close to Tunisia and Malta. Given their distance away from Sicily or the mainland, they continue to be off the radar of most visitors to Italy.

That being said, they boast some of the best beaches in the country. Lampedusa’s Isola dei Conigli, or Rabbit Island, was recently voted one of the world’s most beautiful beaches. The islands’ beaches are also home to the endangered loggerhead turtle.

Taking the boat from Termoli, you’ll land on the larger of the chain’s five islands San Domino. A visit to the laidback island or its neighbour San Nicola (where most of the population lives) is like stepping back in time.

Lying between Corsica and the mainland, Elba is famously where Napoleon Bonaparte spent his first exile. It’s also the third largest of Italy’s islands after Sardinia and Sicily.

Elba, though, is not your typical Tuscany getaway. It has snorkelling, beautiful beaches, and thermal baths beckoning you away from the region’s ubiquitous rolling hills and cypress tree alleys to this small offshore idyll.

Italy's islands will be 'exiled' by vaccine restrictions, warn mayors