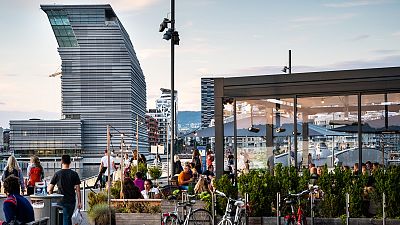 The opening of a new gallery or museum is usually a major event for any city, having taken years to evolve from the germ of an idea on an architect’s drawing board into a living, breathing behemoth.

With the ongoing COVID-19 pandemic, many of the world’s most hotly-anticipated new cultural spaces have opened with little - or even no - fanfare, that is if they even opened at all.

Here are some of the new museums and galleries you’ll need to hot foot it to once pandemic restrictions ease and international travel resumes.

Joining the ranks of old buildings around the world being given new life as hotels, housing or cultural spaces is Paris’ Bourse de Commerce, a former stock exchange building.

Restored to its former glory after decades of neglect, the historic landmark’s new multifunctional exhibition space, nesting beneath its spectacular 19th century dome like a Russian doll, will be home to some of the 5,000 pieces of modern art in the Pinault Collection.

The gallery’s opening date this year is still to be confirmed and will largely depend on when local restrictions in France are lifted.

Under the watchful eye of the nearby Sphinx and pyramids, construction work on the Grand Egyptian Museum in Giza is nearing completion. It promises to be the most significant museum dedicated to archaeological artefacts, eclipsing Athens’ Acropolis Museum that opened more than a decade ago.

The opening of the museum was pushed back in April 2020 until a yet-to-be-announced date in 2021 because of the pandemic after several building work delays, meaning visitors to the land of the Pharaohs will have to wait a while longer to see the complete collection of Tutankhamen's tomb treasures.

You'll also have to wait to visit the now fully-opened National Museum of Egyptian Civilisation (NMEC), which officially threw open its doors on 4 April. While it has been partially open since 2017, its grand opening was marked by a lavish procession of the mummified remains of 22 ancient kings and queens - dubbed the "Pharaohs Golden Parade" - through the streets of Cairo to their new home.

There are few cities in the world where history is writ quite as large as it is in Berlin. Thanks to war and partition, brutalist concrete now sits cheek by jowl with neoclassical and modernist buildings.

It’s little wonder then that Berlin’s newest cultural space not only bridges history but also functions. Formed by renovated or reconstructed parts of a baroque palace devastated in the Second World War and a modern facade, the new Humboldt Forum sees itself as Germany’s answer to the Louvre. Bringing together collections from other institutions into one space, the Forum is breaking the mould of a traditional museum.

Opened in a low-key ceremony online in December, the €670 million building is yet to welcome any visitors in person.

Nashville is famously the heartland of country music. But the city’s lively downtown area - home to the Grand Ole Opry and Ryman Auditorium - is also now the site of one of the singularly most important music museums; the only one wholly dedicated to celebrating the musical genres created and influenced by African Americans.

Since it opened last autumn, the NMAAM’s lovingly curated exhibitions spaces immerse visitors in the story of jazz, the blues, hip hop and over 50 lesser known musical genres pioneered by the African American community.

While it was the subject of heated debate over design and location, we think we can all agree the new waterfront home of the Munchmuseet is nothing short showstopping.

Tailormade to showcase the work of Norway’s most eminent modern artist, Edvard Munch, whose iconic oeuvre The Scream is recognised, copied and parodied the world over, the completed museum has been mothballed on no less than two occasions.

It’s official opening was originally scheduled for autumn 2020 but was pushed back to spring 2021. It is now due to open its doors in the autumn when the public can finally visit the world’s largest gallery devoted to a single artist.

When it comes to art, few cities take it as seriously as Vienna. Some of the world’s most important artworks are housed in more than 100 museums; from masterpieces by Gustav Klimt and Egon Schiele to works by rising contemporary stars. There is now another name to add to the long list of cultural icons in the city: the Albertina Modern.

A sister to the city’s iconic Albertina, the gallery, which opened in May 2020 at the height of the pandemic, claims the crown of being home to one of the world’s largest modern and contemporary art collections in the world. Some 60,000 artworks by 5,000 artists, including legendary Andy Warhol, adorn its exhibition spaces.

For art lovers, X marks the spot. Originally slated to throw open its doors in March 2020, the launch of one of China’s most ambitious art galleries was pushed back to the end of May last year as the country battled to control the spread of coronavirus.

Founded by twenty-something art collectors Michael Xufu Huang and Theresa Tse, the impressive gallery is designed with newer generations of art lovers in mind, showcasing up and coming contemporary Chinese talent as well as modern iconics like Warhol.

While China’s borders remain closed, international visitors are not able to delve into its treasures just yet.

Every weekday, Euronews Travel brings you a story from somewhere different around the world. Download the Euronews app to get an alert for this and other breaking news. It's available on Apple and Android devices.

These communities in America are paying digital nomads to move there