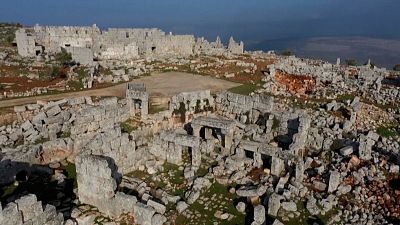 New drone footage shows ancient ruins from the late Antiquity and Byzantine eras including villages, churches, and monasteries in the northwestern Syrian province of Idlib. In recent years, the area has been hit hard by the country’s brutal 10-year war.

Before the war, Syria would receive thousands of travellers wanting to know more about its rich historic tapestry. But in recent years, tourism has all but stopped.

In the video, drone footage captures the beauty and tragedy of what Syria once was. Ayman Nabo, head of Idlib's archaeological centre, explains, "Idlib province is home to more than 360 heritage sites which are registered on ministerial lists, including 40 villages on the World Heritage List and which fall within five archaeological parks.

“These sites date back to prehistoric times until the late Islamic period. They have been subjected to numerous violations, the most serious of which being the shelling of Russian warplanes and the artillery and tanks used by the Syrian regime.

The history of Syria

Bordering Lebanon, Turkey, Iraq, Israel, Jordan and the Mediterranean Sea, Syria is a diverse landscape. Home to fertile plants, high mountains and deserts, it also has a rich history.

The country’s landscape is made up of structures which reflect ancient antiquity and classical antiquity. During the Roman Empire, the larger Syria was divided into a number of politically independent provinces, which we now know as Palestine, Jordan and Damascus among others.

Why is Syria at war?

A decade ago, Syria conducted a peaceful uprising against its President, which has since scaled into a civil war. Since 2011, the conflict has killed nearly half a million people.

The war began following an uprising against high unemployment, corruption and lack of political freedom under the reign of President Bashar al-Assad. In March 2011, the President retaliated with brute force to crush the pro-democracy demonstrators, which fuelled unrest. Soon, opposition supporters relied on arms for protection, and later to attack security forces.

The violence continued to escalate, and the country found itself in a vicious civil war.

Press play to find out more.

Why these surfers in Australia are learning about Indigenous culture

Why is Nepal trying to ban women from travelling?