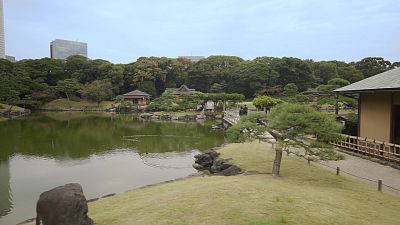 After devastating US airstrikes during the Second World War, Tokyo was almost razed to the ground. But the city quickly rebuilt itself. Now the Japanese capital is a vibrant place, well-known for its futuristic urban landscape, but also for being a “green” capital. You can find nature there where you would least expect it.

_A city adapting to its green needs _

13.9 million people live in Tokyo and it is one of the world’s most densely populated cities. Every inch is used purposefully for urban living. Despite the lack of space, the city’s local authorities have encouraged nature to thrive over the years. A good example of this is the Meguro Sky Garden which sits on top of the intersection of two major motorways. It has thousands of trees, play areas, a vegetable patch and a Japanese Garden. The urban oasis sits 35 metres above street level.

Green spaces in Tokyo serve environmental and recreational purposes. They help protect the biosphere and provide city dwellers with a place to relax. They also sometimes double up as refuge parks in case of a natural disaster.

Kazuhiko Aoyama is the director of the Greenery Policy Planning and Coordination for the Tokyo Metropolitan Government. He says that "the whole greenery of the Tokyo Metropolitan Area, it's about 52% of the total". It also represents 24% of the 23 wards. Tokyo is focusing on creating green areas in-between buildings and policies have been implemented to increase their number.

“If we talk about the whole greenery of the Tokyo Metropolitan Area, it’s about 52% of the total.”

During the Tokugawa periodthat started in the early 17th century and ended in the late 19th century, Tokyo was called Edo. During this time, Japan was run by a feudal military government and green spaces were already valued by the city’s inhabitants then.

In the centre of the city and adjacent to the mouth of the Sumida River and Tokyo Bay are the Hamarikyu Gardens, some of Tokyo’s oldest feudal gardens. Sek Jia Ho is a guide at the gardens. He gave us a bit of insight into its long history. "The garden was built more than 360 years ago" and "it was owned by the Tokugawa shogunate", mainly being used as a second residence. The remains of Edo castle were eventually transformed into the Imperial Palace after the shogunate and the Meiji Restoration capitulated. It was granted to the Metropolitan Government of Tokyo in 1946.

The gardens suffered substantial damage during the Second World War. Its tea-house that dates back to 1707 was burnt down and rebuilt in the 1980s. It's where the feudal lords would once come to enjoy some refreshments and go fishing. But now everyone can enjoy its 25 hectares of formal gardens, pathways, buildings and brackish waters.

The Hamarikyu Gardens are unique because its ponds are the only remaining seawater ones within Tokyo. They attract a variety of different fish and birds. Sek Jia Ho says you can find "Japanese Black Porgies, flathead grey mullets and red stingrays" there. The gardens also boast two out of only five nationwide duck hunting sites.

Tokyo is both steeped in history and forward-looking, always renewing itself without forgetting the past.

In the trendy area of Daikanyama in Shibuya, Log Road is a recent regeneration project. This public space and leisure destination sits on what was once part of the old Tokyu railway line. Tomotsuna Sasaki is a manager at Log Road Daikanyama which is part of the Tokyu Corporation. He says that “this project was born because we wanted a place where everyone could enjoy coming at any time of the day and whatever the season. When we built the project, the most important thing we paid attention to was how to adapt to the area, if we were able to give it a local feel. So we used the former rail tracks to create a walking path”.

The planners were careful to create a venue that would be used not only by locals, but also attract people from other areas. It has shops, restaurants and cafés, as well as benches and public spaces which offer opportunities for social interaction and relaxation in a green setting. All the trees and vegetation were carefully selected.

Urban life can be overwhelming, but green spaces like the ones in Tokyo provide havens of calm to the bustling city.

How a clash of cultures transformed Tokyo's Harajuku district