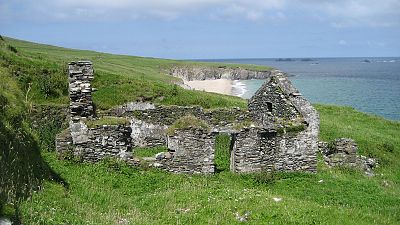 "I don’t think anything can prepare you for the cold showers – especially at the end of the season in autumn. But you do get used to them surprisingly quickly," confides Annie Birney.

Leaving the pulse and heat of city life behind, she part of the past year off-grid as a caretaker on the Great Blasket Island - the larger of a smattering of uninhabited rocky islands off Ireland’s wild southwest coast - with her partner Eoin Boyle.

There's no electricity, hot water or WiFi connection. But having the run of their own island, just over 6km long, more than made up for the spartan living conditions.

"We had an idea that the landscape would be wild and beautiful – but I don’t think anything could prepare us for the sheer beauty of the place," says Annie. "It is no wonder that people feel such a sense of pride for this part of Ireland and fall in love with it".

There were days when a mist came down between the mainland and the island – this was a very surreal experience as the mainland would disappear for days.

Theirs are perhaps among the most oversubscribed jobs in the world. Luckily, a vacancy is opening up after the pair headed back to their old lives in Dublin and the mod cons on the mainland at the end of the season.

In 2020, Alice Hayes and Billy O’Connor, the owners of a coffee shop and four self-catering cottages on the Great Blasket, were inundated with nearly 24,000 applicants to be caretakers of the properties.

The closing date for applications for this year’s hosts is Friday, January 22, and due to last year’s overwhelming response, the couple has been forced to set a cap on the number they can realistically consider.

The job advert itself stresses that the role is "not a holiday job" and that "caretakers must acknowledge that they are on an island with very little resources".

While the job is intense, and the working conditions somewhat unique, Annie and Eoin weren’t phased by the prospect. If anything, they discovered a new-found appreciation for the hardy souls who used to live on the islet.

"I think we came off the island having such a respect for the resilience and resourcefulness of the people who live there all year round".

Sitting on Europe’s most westerly point, the archipelago was once home to a thriving Gaelic-speaking community. Increasingly violent storms and inclement weather threatened to cut the community off from the mainland, forcing the eventual evacuation of the last remaining islanders in 1953.

Besides the abundance of wildlife that has reclaimed the island in the subsequent years, the remnants of civilisation are still tangible with shells of derelict stonewalled cottages rooted to the sheltered hillside.

"Walking through the old village, with the ruins of the houses appearing out of the fog and hearing the cries of the seals on the strand is something I’ll never forget," Annie says reflecting on her time as an islander.

We have learned so much about ourselves and each other throughout the entire experience. We had the opportunity to see each other in so many situations, both stressful and not, that we may never have seen ourselves in otherwise.

As enriching as those experiences were, life on a deserted island without modern conveniences does present its challenges, not least the delivery and preservation of fresh food.

"We had great fun trying to keep our fruit and vegetables fresh with no fridge," says Annie. "What was interesting was we got a lot of tips from our parents who would remember their older relatives keeping food fresh without fridges".

"Another thing that took us by surprise is how precious a resource daylight is on the island," she added.

"When the sun goes down behind the hill, you lose light very quickly inside the houses. You can still do jobs like cooking and the washing up with candles, but it’s much easier if you adjust your timetable to daylight".

Life on the edge of the world also didn’t mean the island wasn’t touched by the ongoing COVID-19 pandemic.

"Our experience of working on the Great Blasket Island this year was of course quite different because of the pandemic," Annie says.

"There were people staying in the guest houses during our stay on the island as restrictions had been lifted for a time in Ireland. So our job each day was to clean the cottages between guests and make sure that they were cosy and -most importantly- safe to stay in".

An easing of restrictions in Ireland over the summer meant that a stream of visitors made it out to Great Blasket. Coronavirus was something the couple were still acutely aware of, cleaning the holiday cottages top to bottom, disinfecting all surfaces and changing the bed linen to create a sterile environment for their next guests.

Would the couple do it all again? "We would absolutely do it again – it was a once in a lifetime experience and has changed our way of thinking completely," says Annie.

"We have learned so much about ourselves and each other throughout the entire experience. We had the opportunity to see each other in so many situations, both stressful and not, that we may never have seen ourselves in otherwise".

Having returned to mainland Ireland, days on the island will never be far from their mind. “The view of the Atlantic from our front door was unforgettable and we miss the seals, seabirds, and donkeys that we saw every day," says Annie.

"There were days when a mist came down between the mainland and the island – this was a very surreal experience as the mainland would disappear for days. You really felt as if you could be miles away from Ireland".

This Norwegian concept could be the perfect lockdown tonic