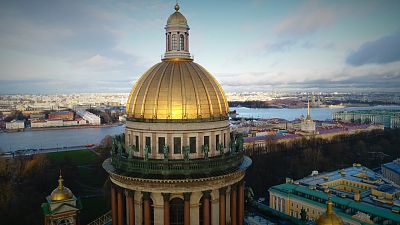 Saint Petersburg is a beautiful Russian port city that combines history and modern charm, as we discover in this week's Explore.

The best place to delve into the history of the city is at The State Hermitage Museum, located in the majestic Winter Palace, which was once the official residence of the Russian Emperors from 1732 to 1917.

"Altogether, when things and great works of art are placed in these palaces, they are masterpieces of architecture, and each of them tell stories about the history of Russia. All of this together creates a unique atmosphere at the Hermitage, and that is why it attracts people," he said.

The Hermitage started as a small extension of the Winter Palace - and now it is one of the largest museums in the world.

The masterpieces of Dutch painter Rembrandt are among the items on display there.

Fabio MastrAngello is the artistic director of the city’s Music Hall theatre. He fell in love with Saint Petersburg at first sight and moved to the city eighteen years ago.

He took us on a tour of it, and showed us some of his favourite places.

“Kazan Cathedral is the most harmonious. The proportions are ideal. Perhaps it is the most musical cathedral in Saint Petersburg," he said.

He also showed us the Peter and Paul Fortress, that was founded by Peter the Great in 1703.

“I have not yet met a single person who has visited Saint Petersburg and has not returned, they all come back,” he said.

Thanks to numerous canals, streams, and rivers, Saint Petersburg is often called the Russian Venice of the North.

There are also many new vibrant places in the city. One of them is Sevkabel - a historic factory which has been turned into a creative space.

"The main tourist product of the city is its special atmosphere," explained Sergey Korneev, Chairman of Saint Petersburg Committee for Tourism Development. "A combination of everything, the history of the city, modern life, contemporary art, what happens in creative spaces, the are four seasons of the city, during which something new, something unexpected happens.”

New Holland Island is also one of Saint Petersburg’s newest tourist destinations. For centuries it belonged to the Navy and was closed to the public. However, now the historic area has been turned into a vibrant public space - and as in every place I visited in Saint Petersberg, I could feel the unique atmosphere of the city.

I explored the eco-side to Puerto Vallarta, on Mexico's Pacific Coast

UPDATED: COVID-19 Travel restrictions for every country in Europe

Which European countries require a booster jab from travellers?