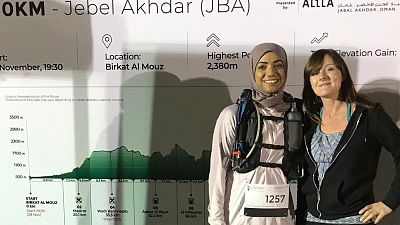 In May 2019, Nadhirah Al Harthy became the first Omani woman and the second Omani to climb Mount Everest.

The 42-year-old was part of the all-female Arab team; Joyce Azzam and Nelly Attar of Lebanon and Mona Shahab of Saudi Arabia who climbed to the top of the world’s tallest mountain.

The “Dream of Everest” team quietly notched the historical summit amid a controversial season catalyzed by media reports of dangerous “traffic jams” on the peak.

Al Harthy has also twice taken on the challenge of the 130km Ultra-Trail Mont Blanc (UTMB) race, which launched an edition in her home country in 2018. Both sports are possibly outside the traditional gender purview for women in Oman.

Her adventure sporting aspirations have gone down well in the country - but how does she feel about being something of a torchbearer for other women in the Arab nation wanting to follow in her footsteps?

“This year I actually felt more pressure on me,” says Al Harthy, “because everybody saw that I climbed Everest so they think I can do anything, like the UTMB and other races.”

“I felt a huge responsibility. But I had to pull out after 25km as I got injured.”

“But I want to encourage other Omani’s - especially women - to try the sport. I think we can do it.”

Encouraging women in sport may not be such a far-flung concept in the country that’s situated on the mouth of the Gulf at the south-east corner of the Arabian Peninsula.

For some time now the country has been preparing for a gradual decline in its oil revenue. Vision 2020 was launched in 1995 in a bid to achieve a sustainable and diversified economy.

One of the goals was developing tourism. With the country’s 1700km of coastline and a good climate from October to April (after which the temperature can touch 50c), the Sultanate wants to attract 12 million tourists a year.

But what has this to do with women?

It began with sailing at Oman Sail, a government organisation launched in 2008 to develop the sport in the sultanate.

With the 2016 Olympics in Rio de Janeiro on the horizon, Oman hoped to meet some of its medal demands in dinghy and wind-surfing events by building a budding group of women sailors.

So it surely wouldn’t be long before the country’s other terrains would be exploited to draw in the traveller.

The sheer-sided cliffs of the Western Hajar mountains, with the centrepiece of the 3,000m high Jebel Shams mountain (one of the highest points on the Arabian peninsula), was certainly a draw for the UTMB organisers, as they were for Al Harthy and her Everest training.

Her sessions included running for 50 kilometres, swimming for four hours, and climbing the Sultanate’s various mountains to increase her endurance for the world's tallest mountain.

In 2018 there was only one edition of the Oman by UTMB race, and Al Harthy used the gruelling 137km run in the remote wadis to measure her training progress.

Al Harthy was not an obvious candidate for climbing the world’s tallest mountain - or as an ultra runner.

She has a master’s degree in geography, a job in the public sector, and says she has a normal, happy life with her family in Muscat.

Despite dropping out of the 137km race after 90 kilometres, she returned in 2019 year to have another go. Unfortunately, she was again disappointed after injury forced her to drop out after 25km.

But she doesn’t want this to hold any women in the country back from taking on such challenges.

“The main thing is we must be ready to do something like the UTMB, physically and mentally. We should prepare ourselves with knowledge, how we should train and eat, everything so we avoid any injuries and failures - but if we fail - we are ready for that too.”

“We should try and give ourselves the space to do new things, but in the proper way.”

Before the race, Al Harthy felt nervous, but also more confident, “because this is my second time here. I didn't finish last year. I did 90km and then I stopped as I was very tired and exhausted. So this year I think I trained well and I'm ready for this. I trained all of the route the last months and I want to do it. I want to finish.”

Al Harthy says her journey to summiting Everest and the UTMB wasn’t easy; “because before that I was not a climber or a runner, I was just going to the gym to lose weight and I decided to climb Everest so I started everything from zero. I started learning how to hike, how to do mountains, how to run."

“I decide to climb Everest 2017 and I trained for two years. Then I did it in 2019. So I started to learn everything during the two years when I was training.”

“I saw it as something nice. I never knew that there were such things as outdoor sports that are nice and very exciting, so I thought ‘why not?’ Now there are many, many ladies doing this.”

But she says the training this time was different from that of Everest, “because you need time and I'm working, so I’d drive from Muscat to the mountains and I would spend my weekend's training on all of the routes in Jabal Ahbar. It’s not easy, but when you want something, you just do it.”

“In the last few weekends, I was doing between 50 and 70 kilometres.”

For Al Harthy, the hardest part was the diet, “because my mom is always cooking for us, so it's not easy to say no.”

“I try to avoid sugar. This is the main thing. But I'm eating normal food at home because mom is cooking. So it's all healthy and good.”

In her opinion, it doesn’t matter if you are a man or a woman; “It's all difficult, there’s nothing easy.”

“When you want to do something, you have to train. We have to do it in a proper way. We should have a passion for what we are doing. If we have a goal, we have a dream, it should be very clear for us. So we know exactly what we should do, how we should eat, how to train. Everything.”

“At the beginning, they didn't know that I wanted to climb Everest. I told them two months before."

And has she inspired many Omani women?

So what’s next for Al Harthy?

“Now I'm here and I don't have other dreams, I only have the UTMB so I'm focussed on the finish line, so there it will end.”

Everywhere in Europe that travel strikes are planned in December