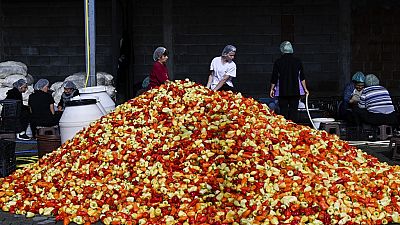 As autumn arrives, there is an abundance of the ruby-red fruit across the Balkans, and in Krusha e Madhe in Kosovo villagers have put the vegetable to good use.

The rich pepper relish, Ajvar has been made by households in the village for generations to stock up pantry shelves for winter.

Making Ajvar (pronounced "eye-var") begins by charring the peppers, then peeling, mincing, or chopping them and simmering them with sugar, vinegar, and sunflower oil, which gives the relish its deep rusty colour.

We grill them, peel them, chop them, and cook them. That's the short version.

They are then conserved in glass jars and consumed throughout the year.

Its creation is a labour-intensive rite performed in kitchens and yards across the Balkans as the leaves begin to turn.

It seems to me that Ajvar and peppers bring people together... this red colour seems to make them happier

Stevica Markovic
Villager near the town of Leskovac, a southern Serbian area famed for its peppers.

Family recipes are a matter of pride with different ingredients used across the region: while Macedonians add aubergine to their much-loved Ajvar mix, many Serbian devotees stick to salt, sugar and vinegar.

We women all exchange recipes, but everyone thinks theirs is the best

Several Balkan countries claim Ajvar as their own, though its origins are not entirely clear.

The first known use of the name Ajvar was by 19th-century restaurant owners in Belgrade, most of whom were from northern Macedonia.

Ajvar is thought to derive from the Turkish word "Havyar" for sturgeon caviar.

The name was probably meant to denote a similarly exclusive product, given the complex preparation and then-costly ingredients such as sunflower oil.

But one thing is ubiquitous: the smell of the wood-fire roasting of peppers wafting through towns and villages each autumn as families prepare the region's best-loved relish.

Slathered on bread, nibbled with cheese, or served alongside meat dishes, whatever its roots, the rich spread has long been loved across the Balkans.

Would you taste the world's hottest chilies?