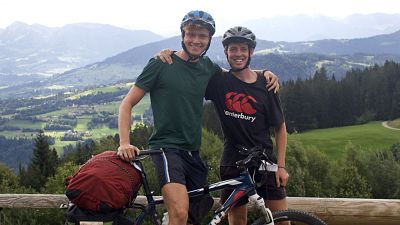 Ben Brown and Austin Oliver are two twenty-somethings on a mission to prove long-distance cycling can go hand in hand with a vegan diet.

The pair are just recovering from a 40 day cycling expedition across Europe, covering 2,000 kilometres over eight countries and surviving on a plant-based diet day in, day out. The ride was in aid of WWF’s Amazon Appeal and they raised over £2,300 (€2,493) - beating their original target of 2k.

Calling themselves the ‘Going Green Team’, the two friends planned to cycle all the way from London to Budapest in 40 days, setting off on 4th August. But due to travel restrictions in Hungary, they had to finish the last leg of the journey by cycling directly over the Alps through challenging terrain towards Italy, where they ended up in Venice.

They filmed the whole thing on Ben’s Youtube channel and released a video charting their progress every week. The videos feature a few treacherous moments where hills seem just too steep to climb and even a night where they had to camp in a wooded area known for brown bears.

Throughout their trip, Ben and Austin also made sure to visit sustainable building projects around Europe that are helping to fight climate change, as Ben is an architecture student in the UK.

For such a long and testing trip, the pair claim they needed activewear they could “wear over and over again”. In keeping with their green credentials, they were sponsored by eco-friendly brand Organic Basics.

We ate lots of stews with beans and pulses.

Ben calls the trip “life changing” and says that not only are they proud of raising a substantial amount to protect the Amazon Rainforest, they also proved that athleticism and veganism go together.

“Following a vegan diet on the trip was so much easier than we expected,” Ben tells Euronews Living.

“Every country we visited had great vegan options. We were able to adequately provide ourselves with the nutritionally dense fuel that we needed to complete this challenge using purely a plant based diet. We ate lots of stews with beans and pulses, a favourite was chickpea and sweet potato stew."

What is the Amazon Appeal?

So far, just over £41,500 has been raised for the Amazon Appeal in total. The target is £50,000, which WWF claims will equip and prepare groups of volunteers to fight forest fires.

While the world focuses on the pandemic, new laws have been proposed by the Brazilian government. These have further encouraged illegal invaders to grab, deforest and burn more of the Amazon, according to WWF. Scientists warn that we don’t have long before the Amazon reaches a tipping point when it could start to degrade and no longer function as a rainforest.

Every hectare that is cleared pushes it closer to the edge and risks catastrophic climate change.

Together with local organisations in Brazil, WWF is supporting indigenous communities to defend their territories and land rights, amid the fires.

Money raised will also go towards helping these communities in their struggle to survive COVID-19 and contribute to campaigning for an immediate end to deforestation and mining in the Amazon.

Beer and bikes: A Brit's guide to Belgium

Should alcohol be allowed on flights? We asked an air hostess

Spain: Unmissable local festivals back for 2022