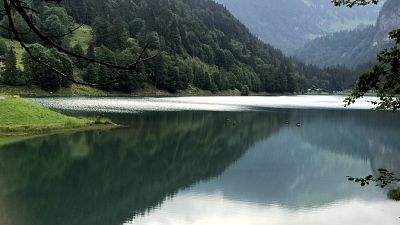 Europeans have started to travel again. Various caveats and exemptions are now of course, de rigueur, but by and large, the restoration has begun. Hotels, campsites, pools and beaches are open across the continent, as are the bars and restaurants, within which the conversation has turned to holidays, destinations, activities, and weather.

France is an obvious choice on so many levels. But which France? That’s the question. In the north you have Normandy and Brittany -- where the world is literally your oyster -- and the spectacular Chateaux of the Loire Valley. The south has an enormous Mediterranean coast with hotspots such as Nice, Marseille and St Tropez, but never rule out the Pyrenees. In the west you can surf in Lacanau-Ocean and explore the unbeatable wines of Bordeaux. But it is the east that I’ve gone for on this occasion.

Morzine in the French Alps is best known as a ski resort, but it has diversified over the years and is now very much on the map as a destination for summer, particularly for those of a sporting nature. At the end of June, the pistes are a verdant green, dissected by irregular dirt tracks where runners can often be seen cowering amidst an onslaught of mountain bikers. The town has just opened up after lockdown and though quiet, the buzz is beginning to emerge.

The town is, as you would expect, a valley of pine. Small enough to be chic, but big enough to have atmosphere.

Our base was the 3* family-run Hotel Equipe, which boasts a roster of facilities more befitting a 4* but don’t tell them that or they might put the prices up. Sleeping underneath the protruding head of a cow can be disconcerting, but the spacious pine room and large terrace soon allow one to laugh it off. The view, delightful, and the pool, spa and sauna providing a lovely place to relax after a few games on the hotel squash court.

Sport is truly at the heart of Morzine’s attractiveness, and the authorities there have made it cheap and easily accessible. In September they will discover if they have been successful in their bid to be the official preparation centre for the French cycling team in their readiness for the Paris Olympics of 2024.

Fittingly, the theme of our visit is the triathlon.

The first discipline is the swim. We head to Lake Montriond where the surrounding hills partially form a cove at the far end of the lake but remain open at the narrow end of the ellipsis to reveal more distant peaks. The depth of vision is magical.

It has been a comparatively cold and wet morning, and an early swim feels trepidatious but former professional triathlete Amelia Pearson tells us there is nothing to worry about. Amelia and her husband Joe run Buzz Performance. A 'mom and pop' operation in scale but with serious credentials for training, so you are in very good hands across disciplines. The ambitious couple hails from the state of Tasmania, but fell in love with Morzine after travelling the world and settled here eight years ago. But after visiting so many places, why Morzine?

"Morzine's pretty special I think," Amelia grins. "The combination of being a really friendly town with amazing scenery, but then being able to ride straight out of your front door and over mountains is an experience that you don't get anywhere else. I came here when I was racing for a French triathlon team in the Grand Prix. We were using Morzine's incredible triathlon facilities and I fell in love with it right from the beginning."

Bur with the COVID-19 pandemic, small businesses suffer. How did she and Joe keep their head above water? The secret is in what they offer to local residents, but the fear was still there for core business.

"Joe and I started Buzz performance as just the two of us to begin with, and over the last couple of years we now have other instructors working with us. We do a lot with local residents but a big part of our business is people on their summer holidays continuing their fitness."

"Lockdown for us started at the end of winter so it was inter-season anyway, but the longer it went on it got a little bit more scary. The talk was of whether summer activities were going to be able to happen at all, but hopefully now that people are starting to be able to travel, holidaymakers will be able to see this wonderful place," she adds, before telling me to stop stalling and get in the water.

I have brought my wetsuit so I have a decent level of protection. The water isn't cold at all and the one hour lesson goes in a flash. It's bliss to be in that lake with all the fairyland scenery. I could have done another session with pleasure.

Beyond those hills lies Switzerland

The romance of geography has always been a pull for travellers. The Alps were an example of the 'The Sublime' to our eighteenth- and nineteenth-century ancestors and they provoke similar opinion even in 2020.

The changing of Earth's geography has historically been the responsibility of plate tectonics, tsunamis and war. It is not usually a handful of luncheons that affect cartography. However, in the late 1960s, something very unusual happened.

In 1968, Rene Baud of the Morzine-Avoriaz authority and his Swiss counterpart Jean de Senarclens actually affected the movement of the Franco-Swiss international border.

The tranche of land concerned is called the Pas de Chavanette, which is still part of the ski area and known on the Swiss side as the 'Swiss Wall'.

Both men needed more space for their ski lifts and thus a clever reworking of the official border between the two alpine nations would have been the solution.

Of course, this sort of change seemed impossible to enact. That is -- until you consider human nature. So the French team took the Swiss team out for a series of lengthy meals, during which much local wine was consumed. The result? We leave the summation to Rene:

"In six months, and three nice French-Swiss meals, we managed to move a mountain."

Wise words from Buzz Performance's Joe Pearson. I wish I'd listened to them.

We began the cycling training during a shower but when the climbing began, the heat became a factor. Some of the gradients are pretty steep but one can tire of the low gear push. I decided to hit a higher gear, stand up and get the climb over with. The trouble is, it's hardly ever over in the hills above Morzine.

The swim and bike training is just a taster, and I'm keen to sign up for a week so I can consolidate all the advice I am being given. There's something inspiring about being in the hands of a true pro, particularly when they are as personable as the team at Buzz.

The final discipline of a triathlon is, of course, the run.

In Morzine and surrounding environs you have a miasma of routes, climbs, trails and roads. In and out of woodlands, dense forests, open ground, rocky escarpments, the terrain is multi-faceted and consistently beautiful.

Taking us on a hilly trail run is international ultra runner Edwina Sutton. You'd never know she was a hardcore ultra beast as she is super friendly, unassuming, and totally client-focussed. She's another ex-pat who has made Morzine her home. Sutton offers fully-personalised programmes to both locals and travellers.

Morzine is not a gourmet town. However, the bar and restaurant scene is vibrant and decent. We ate at La Chamade, which despite the resort being underpopulated at the time, was a hive of activity. One thing you can guarantee at this eatery is a large portion. And after a gruelling day on a bike, you need that. I counted eight fillets on my busy plate of perch, yellow courgette and roast potatoes. The thyme and lemon sabayon provided a little distraction from the fish but the taste was good and we left very full indeed. Le Chamade possesses a cheese selection that is the envy of the region, and the melony local wine is well worth your attention, too. Always drink where you eat, someone sensible once said, but I can't remember who as I'm too full of perch.

Another way to experience the Morzine-Avoriaz area in terms of both food and accommodation is a surprisingly inexpensive bivouac experience.

Hervé Le Sobre is the guide you need.

We hike for miles into the hills, with Hervé pointing out wild flowers, herbs and geographical features. Good humoured, wise, and enlivened where other men his age may seem weather-worn, Hervé is a solid presence. And on top of that, he has in his bag some gourmet sausages.

He finds us a piece of ground on the darkening hillside with the wind becoming more prevalent in our hair after a blazing afternoon. Hervé begins to stoke up the BBQ, and when the sticks, bracken, pine cones and paper begin to take, he unpacks the hammocks we are destined to sleep in.

A night under the stars is a rare diamond, and though the birdsong is hard to ignore from dawn onwards, you experience a oneness with nature that you feel you have always yearned for.

For a town that made its name and fortune from the mining of slate, Morzine is a heady mix of the antiquated and the modern. Its 'station-villages' nature keeps it a popular choice for winter sports enthusiasts, but how small business owners have triumphed over their COVID adversity is the key to the area's survival all year round.

Accommodation: One nights’ accommodation at Hotel L'Equipe (bed and breakfast only) is priced from 93€ per room based on two people sharing a double room. www.hotelequipe.fr Breakfast 12€ pp. +33 4 50 79 11 43

Flights: Return flights to Geneva are available from London Gatwick with easyJet, priced from £59 pp. www.easyjet.com

www.edwinasutton.com – Trail Running 25€/hour for a private session of an hour.

For all-round enquries and information: www.morzine-avoriaz.com

How to enjoy Switzerland's iconic ski resort, Verbier 'off season'

In search of ultimate wellbeing in the Swiss Alps