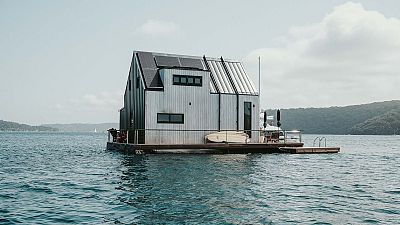 Wherever you are in the world, chances are you’re stuck inside adhering to social distancing measures and wondering when you’ll be free to roam the streets and do normal things once again. At times like these, the idea of travelling abroad has never seemed so alluring. We know that flying leaves a hefty carbon footprint on the earth, especially when you’re travelling long distance, but it’s human nature to want what we can’t have.

Lilypad luxury floating villa off the coast of Sydney, Australia, is one of those dreamy getaways you had in mind. Located in Palm Beach, it’s a boutique hotel you can rent for a romantic, overnight stay in the middle of the ocean. For an additional cost, a private chef awaits you and you can even have spa treatments outside on the decking. The interior is luxurious, combining traditional craftsmanship with modern aesthetics to create a serene, intimate setting.

Not only is Lilypad a beautiful place to stay, it was also designed with sustainability in mind. Designer Chuck Anderson created the venue to run completely off solar power. Solar energy is a renewable source of energy that is totally inexhaustible, unlike fossil fuels that are finite and produce greenhouse gases.

“Growing up on Sydney’s Northern Beaches and spending much of my life around boats, I always had a vision to create something truly special that people can now enjoy as their own,” he says. "Lilypad Palm Beach certainly brings new meaning to the phrase self sufficient."

The villa has an array of then solar panels strategically placed across the roof, which is then turned into 240 Volt power, allowing guests to run all the modern appliances and luxuries that they would want. So, the coffee machine, dishwasher, Netflix and Wi-Fi all run completely from the sun's energy.

Is it worth the carbon footprint?

If you live in Australia, New South Wales in particular, the Airbnb is a great option for a night away and easily accessible by car. Simply drive to the end of Barrenjoey Road, at the end of the peninsula, and you reach Palm Beach. Once you arrive, you are escorted there by a private tender boat.

But when it comes to travelling to Lilypad from abroad, this begs the question, is it worth staying somewhere eco-friendly if you have to fly to get there in the first place?

Taking a long-haul flight generates more carbon emissions than the average person in dozens of countries around the world, according to research by The Guardian. In 2019, almost 40 million flights were estimated to have departed from airports worldwide, that’s more than 100,000 trips per day. London to Sydney, for example, is 10,573 miles one way. If it’s a return flight, you are generating an individual carbon footprint of 5.87 metric tons of CO2, which is the equivalent of 1.2 cars being driven for a year.

So is the fact that an Airbnb operates using solar power worth the trip around the world? We spoke to Dr Lucie Middlemiss, Associate Professor in Sustainability at The University of Leeds, UK to find out.

“It is great when tourism providers think about environmental issues as part of their offer,” she begins. “However the benefits created by a ‘solar-powered Airbnb will be quickly undermined if guests are using air travel to access this location.”

Air travel releases large amounts of carbon dioxide into the atmosphere, she concludes, “which will not be offset” by staying in eco-friendly accommodation.

Guests travelling by land will be reducing their impacts though, she says. Those wishing to travel from abroad can also take part in carbon offsetting schemes. Passengers can pay a little extra for their flights to help compensate for the carbon emissions generated. This money is then invested in environmental projects, such as tree planting schemes, which reduce the carbon dioxide in the air by the same amount.