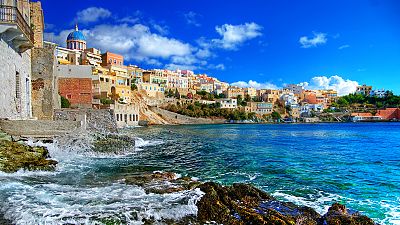 Take century upon century of empires jostling for supremacy at sea and ships sailing into exotic ports fringed by fortresses and temples of stone and set all this against the backdrop of a shimmering blue sea, and you may well start to fall under the eternal spell of the Greek islands. The archipelago is varied and vast, and Greece's rich seafaring past means that from Corfu to Crete by way of Mykonos, Patmos, Karpathos and many more there is a veritable tapestry of history and culture to discover.

The Cyclades: Islands of Sea and Sunlight

The Cyclades are islands of sea breezes and sunlight and here were nurtured some of Western civilization's earliest maritime trade routes and artistic expression, meaning that history is everywhere. Just 2.5 nautical miles from famous Mykonos is tiny Delos, ancient center of the Athenian-led Delian League and where you'll find some of the most remarkable ruins of the Mediterranean. In Greek mythology, Delos was where Zeus's lover Leto gave birth to Artemis, goddess of hunting, and Apollo, god of music and light, and the island's numerous sanctuaries speak to a spiritual energy stretching back to 1000 B.C.

Another island that invites superlatives is the considerably larger Tinos, with its bucolic landscapes and robust local culinary traditions, including well-established vineyards, making it a rising "foodie" star of the Aegean. For centuries under Venetian rule, Tinos is renowned for its white marble church of the Panagia and its icon of the Virgin, focal point of a major Greek Orthodox procession every August 15. Its trademark white dovecotes beckon too, along with myriad peaceful coves and the fantastical boulders at Volax. Another must is neighboring Syros, whose cosmopolitan main town, Ermoupoli, is the capital of the Cycladic islands. Its origin is intimately linked with the Greek War of Independence and in the 19th century this port was even busier than Piraeus. Highlights include the Italianate architecture and 19th-century Apollon Theater, the 13th-century Catholic cathedral of St. George in Ano Syros and an original icon painted by El Greco inside the Church of the Dormition.

Dodecanese: Convergence of Beauty and Faith

The eastern reaches of the Aegean Sea were the crossroads of many civilizations in antiquity from Phoenicians to Mycenaeans to Athenians by way of Romans, Crusaders, Arabs, Venetians, and more. Patmos occupies a vaunted place in Christendom on account of John the Evangelist who, having been expelled from Ephesus by the Roman Emperor Diocletian in 95 A.D. received his Revelation in the Cave of the Apocalypse on the island. Centuries later Patmos helped galvanize the Greek Revolution of 1821. Today the island's Chora, or main town, is one of the loveliest around and the island's Easter traditions, like those in Corfu in the Ionian Sea, are especially colorful. Visitors flock to nearby Lipsi, mythical island of Kalypso, every August for the feast of Panagia tou Harou to pay their respects to the miraculous icon in the church of the same name. The traditional feast starts with the Vespers on the beaches and the two big squares and continues for 24 hours.

Kos is one of the most iconic of the Greek islands in the eastern Aegean on account of what 3rd-century Greek poet Herondas called its "mild and calming" beauty, its coastline alternating between sheer cliffs and sandy bays. Kos is home to an exceptional Greek cultural patrimony thanks to its distinction as the birthplace of Hippocrates, the "Father of Medicine," in 460 B.C. You can still see the sturdy Plane Tree of Hippocrates, near the Castle of the Knights (built by the Knights of St. John) and marvel at the ancient healing complex known as the Asclepieion, just four kilometers north of the town center. Close to the port there are shrines to Herakles (Hercules) and Aphrodite and the ruins of Xysto, an ancient gymnasium. The fantastic archaeological museum houses funerary altars from the Hellenistic period, classical-era statues and a mosaic from the 2nd century A.D. depicting Asclepius's mythical arrival on the island.

Islands like Kos and the larger Rhodes were ancient Greek and Mediterranean melting pots while others were more isolated: enter slender Karpathos. The most southerly of the Dodecanese is said to have been favored by the Titans themselves and is known not only for its rugged scenery and fine beaches but its unique folk culture. The village of Olympos in the mountainous northern reaches of the island dates to 900 A.D., its remoteness keeping the Saracen pirates at bay and village customs intact. Locals speak with an ancient Doric Greek dialect and women elders still wear the colorful traditional garb and double-chained gold florins, especially at Easter and weddings. And they make makarounes: a handmade pasta served with fresh mizithra cheese and sauteéd onions. Traditional feasts include the Feast of St. Panteleimon in July and the Dormition of the Virgin on August 15, celebrated in churches island-wide.

With an array of historic cities and dazzling shorelines plus a gastronomic heritage second to none, Crete is a journey for all the senses. Many come to the island—the fifth largest island in the Mediterranean—to enjoy its wild natural beauty like Samaria Gorge and the beaches that tickle its long north and south coasts like so many ribbons of paradise, but this is also the starting point of civilization in Europe. In the Bronze Age, from about 3000 B.C. to 1200 B.C., the Minoans flourished on the island. Major Minoan palace ruins center on Knossos, mythical lair of the Minotaur just outside the present day Cretan capital of Heraklion, while mighty Phaistos to the south exerts a strong pull on the imagination. Zakros, on the island's eastern edge and well-positioned for trade with Egypt and the Near East in ancient times, was another Minoan power center whose ruins you can inspect today. In fact, you can find ancient Minoan settlements, cave sanctuaries and mountain shrines all over Crete.

Magnificent scenery but rich literary heritage, too: Crete is also the island of Kornaros, of El Greco and Kazantzakis, author of Zorba the Greek. The cities of Chania, Rethymno and Heraklion all face the Sea of Crete and flourished under four centuries of Venetian rule, but beyond an impressive Venetian architectural legacy you will find them pulsating with a young urban vitality all year long. In Crete sublime settings and centuries of cultural exchanges have created a canvas of contemporary living that leaves no one indifferent—indeed, a journey anywhere in the Greek archipelago will quite likely leave you dreaming of the next one.

Anthony Grant has blogged for The New York Times and co-hosted a morning news show in Tel Aviv. You can follow his winter/spring journey around Greece on Instagram at "athenianation."

Turkish power plant 'at risk of being destroyed' by wildfires

Lithuania warned over pushing back asylum seekers at Belarus border

The raid that killed off Belarus' last independent media platform

Green Pass: Who needs one in which countries and why?

Quarantine scrapped in England for fully vaccinated EU & US citizens