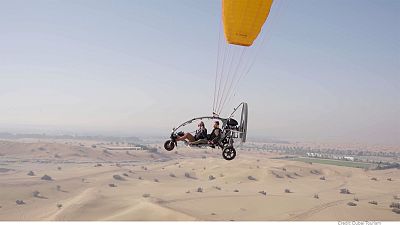 It consists of a tricycle, an engine powering a propeller that fills a canopy and - thankfully- a back-up canopy.

One of the smallest aircraft in the world, Paramotors are the latest way to take to the skies above Dubai's sand dunes.

And as its wing rises, so does Euronews' James O'Hagan's nerves:

"My pilot Jos assures me he’s never needed it ( the backup wing)."

The morning mist clears and Jos Vandenbroucke, General manager pf Paramotor Desert Adventure, has given the word to go ahead.

"Ready for rock and roll? he says.

Paramotors are one of the smallest aircraft in the world and have a great safety record because the engine is only needed for gaining altitude and can be switched off when you come back down to land.

"We will do a spiral. If you can’t hold it anymore James, you just shout."

"The G-force in your stomach is class!" says O'Hagan.

Flying over a stretch of desert reserve, you can see an array of wildlife; families of camels, Arabian oryx and even a tower of giraffes.

"After that, I think I can safely say that I’ve got over my fear of flying and kiss the ground," says O'Hagan.