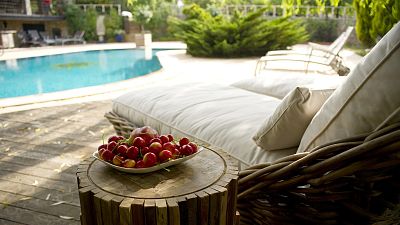 The most polluting part of a holiday to France might not be the flights, new research has revealed.

Flights for a 10-day jaunt from the UK might emit 102kg of greenhouse gases, according to a report by Lund University and the University of Queensland for sustainable tourism operator Responsible Travel.

But, if that holiday was all-inclusive, the carbon footprint of a person’s food consumption could eclipse that figure, reaching 110kg worth of emissions. Add that to 53kg of emissions for the accommodation and the total emissions for a 10-day trip could reach 265kg – 65kg more than the average Brit might usually emit in 10 days.

Considering factors such as agriculture, animal rearing, industrial processing, packaging, transport, food miles and wastage, it measured a range of hotels and holiday packages throughout Europe from Croatia, Spain, France and the UK.

“Your food is a significant, and sometimes the single biggest source of CO2 emissions from your holiday,” said Justin Francis, founder and CEO of Responsible Travel. “To get to net zero carbon 2050 we'll need to fly less and change what we eat.

“We have to change how we approach travel as a whole,” he added. “We need to see a radical review of tourism in favour of lower-carbon holiday.”

How to make your holiday low carbon

Smaller, independent accommodation choices would cut your carbon footprint by 75% compared to four star chains, the study found. It also analysed a variety of ways to get to your destination, suggesting arriving by train instead of plane, or coach instead of taxi could shave kilos off your holiday’s carbon footprint.

Meanwhile, choosing a self-catering break to Croatia was found to generate food emissions of just 28kg – in part due to the immense amount of food waste often associated with all-inclusive resorts. However, for those travelling from the UK, the reduction in emissions from food was overshadowed by flight emissions that added up to 243kg per person due to the increased distance.

Earlier this month, Responsible Travel reported a 126% rise in bookings for its vegan holidays over the past three years.

I explored the eco-side to Puerto Vallarta, on Mexico's Pacific Coast