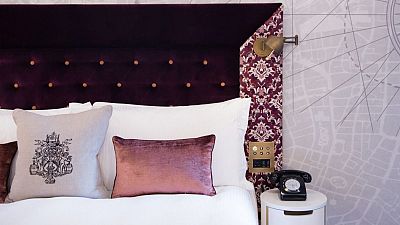 Vintry & Mercer feels like the cooler, edgier answer to its sister hotel - The Ampersand in South Kensington. Named for two of the honourable guilds that were founded in this area many moons ago, this hotel gives nods to this landed gentry whilst also pioneering a fresh, youthful energy for the enthusiastic city crowd that has descended on it.

Considering that this area is mainly a cluster of high rise offices and chain restaurants, Vintry and Mercer has been gratefully received as a representative of the millennial generation - from its subway tiles and potted plants to its Art Deco furniture and factory style windows, it’s definitely been designed to appeal to the tastes of a younger crowd.

As a completely new built (it opened last year), the Vintry & Mercer has had the benefit of being able to design the hotel the way they wish without battling against old structures and systems. As such, it’s 100 per cent run on renewable energy which is sourced from biomass, wind and solar generators as well as solar panels on the roof. The food and drink is also locally sourced and seasonal wherever possible, helping the hotel reduce its carbon footprint.

What's there to explore?

There’s not much in the way of entertainment here besides the food and drink, so if you’re looking for something to do it’s worth venturing into the surrounding area. Being a part of the City of London, it’s close to Leadenhall Market - a covered walkway that houses several designer and independent boutiques - as well as St Paul’s Cathedral. The river, which is just a five minute walk away, also offers spectacular views of London’s famous Southbank. London Bridge can be reached in 15 minutes on foot, making it easy to nip over for to Borough Market.

There are 92 rooms to choose from here, ranging from standard doubles to superior suites. Though not as spacious as in some hotels, they certainly don’t feel pokey - everything has been designed to fit together seamlessly and to maximise the use of space. The king-sized beds are supremely comfortable and the bathrooms - a vision in turquoise tiles and industrial styling - offer cavernous baths and high pressure rainfall showers that are easy to while away the morning in. Stylistic touches such as the vintage telephones, hand selected books and gold table lamps give it a luxurious feel but also pay homage to the history that the name and design the hotel is working to reflect.

What's on the menu?

Overseen by head chef Chris Golding - who previously worked at Nobu London and Dining in Tel Aviv - the restaurants and bar are the real draw to this boutique hotel. Whilst the low key style bistro, Vintry Kitchen, is ideal for a casual dinner thanks to its Asian tapas style menu, if you’re looking to languish over a long meal and a bottle of wine, book into the Roof Terrace restaurant.

The menu here is labelled as modern British, but this doesn’t accurately describe the subtlety and finesse of the flavours and textures used. Chris Golding has taken what he learnt in previous kitchens and created a menu with subtle Middle Eastern and Asian undertones that elevate the dishes beyond the fairly simple flavour palette found in the UK.

Steaks with red wine source are complemented by the three-cheese cauliflower whilst bright pink Dorset Blue lobster comes out glazed and shining with espelette butter. Vegetarians should try the salt baked kohlrabi with goats curd and black garlic - a simple but powerful tribute to the chef’s Tel Aviv days. Simple yet delicious, one of the best things on the menu is actually the Guinness bread which is soft, malty and heavenly - particularly when slathered in the salted butter or a hunk of cheese.

What else should I know?

The jewel in this hotel’s crown is the Mercer Roof Terrace - a restaurant and bar with an outdoor seating area that overlooks the city skyline. Given that several of London’s most iconic buildings, such as The Shard, are nearby, it’s a great place to watch the sun set over the capital with a cocktail in hand. As both guests and the public can access it, this will undoubtedly get busier as word spreads and the summer comes but is large enough to not feel overcrowded.

The evening should be started at the underground bar, Do Not Disturb - a low-lit, hedonistic speakeasy serving up barrel-aged cocktail favourites (the Negroni is a must for lovers of bitter flavours) as well as seasonal concoctions created by the head mixologist.

An excellent choice for those in town on business or pleasure, a visit to the Vintry & Mercer is all about lingering over great food and drink in beautiful surroundings.

Why are skiing holidays in France becoming a thing of the past?