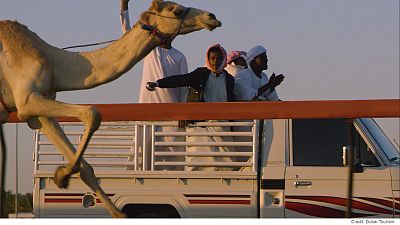 Tradition isn't exactly what first comes to mind when one thinks of Dubai, a city that quite literally grew out of the desert, but tourists are flocking to the Middle Eastern oasis for a taste of its Bedouin past.

Old meets new can be seen at Dubai's Camel Racing Club where these 'ships of the desert' sprint across the perimeter of the famed Al Mamoom racetrack.

Attracting both camel owners and punters alike, spectators can sit in their cars and drive alongside the camels as they hurtle towards the finish line, guided by a remote control jockey.

Organisers say the event is a draw for tourists for a number of reasons.

“When tourists come to the camel racing venues, they see something new. They see how people treat the camels and how the camels compete with each other. They also see how Emirati society promotes camels, '' says the club's CEO and General Amanager Ali Saeed Bin Saroud.

Camel racing was promoted by the former UAE president, Sheikh Zayed bin Sultan Al Nahyan as a way of bringing camels and back into mainstream Dubai culture.

The Al Marmoom Heritage Festival is Dubai’s annual celebration of the traditional Arabian desert culture and vital role which it plays in the cultural identity of its people.

Traditional markets, music and dancing are another way in which the Bedouin culture is kept alive and enjoyed by Dubai locals and tourists alike.

German expat Ursula Musch moved to Dubai around 20 years ago after first visiting in 1993.

She now breeds camels and encourages tourists to experience the Bedouin customs for themselves, as they, like her, may just find their passion in life.