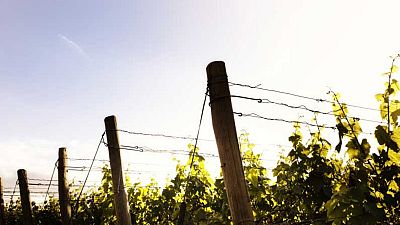 Pierre-Emmanuel Taittinger doesn’t just run one of Champagne’s biggest houses - he also spearheads the region’s calls for UNESCO heritage status. We sat down with him over a glass of Comte de Champagne to talk heritage and keeping it in the family.

Pierre-Emmanuel Taittinger isn’t particularly new to the champagne game. Being from one of the Champagne region’s most famous dynasties has its perks, most notably being the doors it opens and expertise it offers. However, Monsieur Taittinger had to fight for his chance to lead his family house after it was sold in 2005 to a U.S. private investment firm - risking the loss both of Taittinger’s soul and an important player in the industry.

Ten months later, Pierre-Emmanuel bought the family business back (with a little help from Crédit Agricole), and finally achieved his dream of running Taittinger in 2006. Thirteen years later, Champagne has just enjoyed perhaps its most fruitful harvest ever, and Pierre-Emmanuel can afford to be a little smug.

“The harvest has been the best in history, in terms of quality and quantity, a fabulous harvest. Nothing else to say! We’ve had some good harvests over the last ten years, but the quantity was perhaps not there. This one is the best.”

How important was it for both the family and for the Champagne region that you bought back the company?

“I think it was important because it was a way to keep the soul and spirit of the house. Taittinger plays a very important role in Champagne, for sure. We are the largest eponymous family company. We love the city. My father was also very involved in the politics of the region, so we’re a company very much concerned with the social aspect of the region. We have a lot of vineyards, so we are in between the huge groups and the growers.”

“I am also president of the UNESCO mission for the Champagne Viticultural Association. The family is very involved in Champagne. We live here and play a role with our friends and colleagues. We have very good relationships with all our colleagues in Champagne.”

How much of a statement was it to buy back Taittinger?

“I think everyone was happy. I’ve been supported by the whole region because Taittinger is not only the property of shareholders, but the property of the region. We are a small community. The champagne world is a small world - it’s only 300 million among a world of 5 billion bottles of sparkling wine. I always say that we’re only one family. There are not three families - wine growers, cooperatives and Houses - we are one family.”

How did you get so involved in the campaign for Champagne to be recognised with UNESCO heritage status?

“The listing has really been the success of one man, Pierre Cheval, a wine grower. I was the vice president of the mission, but Pierre very sadly had a heart attack three years ago, and so the region asked me to succeed him. Since then, I have obviously continued the work needed for the universal values of the listing, but I’ve also started a big mission for the embellishment of the region.”

“The region has been affected by the First World War and all of us have to continue to embellish the villages and the cities. I work a lot on that, for no money obviously, but I have also created with the UNESCO team the idea of a reconciliation stay. The idea is for people to come from all over the world for three or four days to reconcile themselves with nature, matrimony, environment, etc. The city of Reims is the city of reconciliation: it’s here in 1962 that the two great countries of Germany and France reconciled themselves through Chancellor Konrad Adenauer and Charles de Gaulle.”

“My father by this time was the Mayor of Reims, and he welcomed them with the Archbishop’s party. The word ‘reconciliation’ means a lot in Champagne, because we should never forget that we produce the wine of happiness in a land full of blood since the third century. Champagne has always been on the road to Paris for invasions and so on. Reims Cathedral was very damaged during the First World War, but today this Cathedral embodies the joy, the effervescence, the smile of Reims. Champagne is in the centre of this magic attitude.”

The abbey in Hautvillers, home of Dom Pérignon, has been destroyed time and again but rebuilt in the same place. It’s such a strong symbol for Champagne itself.

“Absolutely. I’m very attached to the myth of Champagne. Obviously we have to work on the quality and we do that: Taittinger, like many houses, has HEV [High Environmental Value certification] and VDC [Viticulture Durable en Champagne certification]. Global warming is the Third World War. We all have to work very urgently, not to save the planet but to save man. The planet is going to survive, even without people.”

“I do think, however, if you want to maintain the prestige of champagne, it’s also important to take care of the image. For example, today a lot of people drink champagne in a wine glass. Not me. Champagne is a wine, but it’s more than that: it’s a symbol of celebration, of happiness, of love, of pleasure, of being together. We have to keep that magic. It’s like if one day the Cannes Festival went without the luxury, the red carpet. It would be a festival like any other.”

So the emotion surrounding champagne is important?

“It’s extremely important. You should never forget that some people are only drinking one or two bottles a year. It’s a small production, so we have to maintain a high level of quality.”

Do you remember the first experience you had with champagne?

“Yes, when I was at boarding school! I was fifteen years old, I was drinking some champagne at night with some friends. One of them is coming to see me today - it’s amazing.”

What’s next for the UNESCO campaign?

“Next for UNESCO is to work on embellishment, reconciliation, and to work on perfecting the organisation of the Champagne mission, because it’s a great region, so we have to do things properly. It’s a lot!”

Fizzling out: Champagne sales down as coronavirus pandemic rumbles on

Grrrrrrr... eeece named the most stressed country in the world

'I was in the water for 11 hours': 2009 plane crash survivor testifies