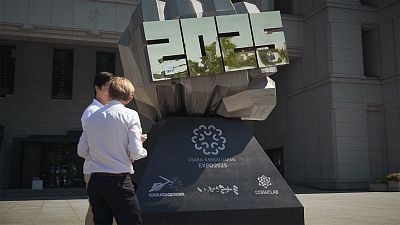 This edition of "Metropolitans" goes to Osaka in Japan, a city with a unique atmosphere.

Osaka is an innovative, dynamic and friendly megacity, which is also a candidate for the organization of the 2025 World Expo.

It is the third largest city in Japan, and also, according to "The Economist", the third most liveable city in the world behind Vienna and Melbourne.

Safe, clean, rich in infrastructure, shops and cultural facilities, Osaka is also legendary for its hospitality and a very positive energy. Roberta Ireton, a young stand-up comic and actress, took us around.

"When I joined Yoshimoto, which is a comedy agency, the first thing they told me is : 'Go to Osaka !' And the reason why is because it's the capital of comedy in Japan, and they said that the people will be your comedy teachers. And I have to say, it was true !" she says.

Local people mobilized for Osaka's bid for the Expo. They installed a "2025" statue in front of the town hall.

The theme of the expo, "Designing Future Society for Our Lives", corresponds very well to Osaka's region of Kansai, the second economic region of Japan and the heart of innovation in the field of science. This is reflected in the many awards given to scientists of the region.

"Professor Honjo, who received the Nobel Prize for Medicine this year, was recognized for his work in cancer treatment research, and Professor Yamanaka, who discovered IPS cells, a new kind of stem cell, is also from this region of Kansai," says Osaka's Mayor, Hirofumi Yoshimura.

The island of Yumeshima, 20 minutes from the city center was chosen to host the Expo. It is a futuristic project , with for example pavilions required to consume no energy.

In Osaka, hundreds of SMEs are developing breakthrough technologies. This is the case for example at Microwave Chemical, where a process almost unique in the world has been developed : the use of microwaves on a large scale in industrial processes.

"This technology is a disruptive technology and it can change the industry which has not changed for hundred years.... We can save energy let’s say by 50 percent and we can also build a plant which is much smaller," says MC's CEO, Iwao Yoshino.

Osaka is also a unique cultural experience. Visiting the site of the expo that took place here in 1970, you can stroll in an incredible Japanese garden, and at Sumiyoshi Taisha, a Shinto shrine whose history dates back more than 1800 years.

"The temple is very important in Osaka’s people life. Because, they celebrate New Year and wish for a good year… But also, for good business. They are very famous for that here! You bow twice, like this," explains Roberta, "And then you clap twice, and then you pray. After you pray you bow one last time. You can also write your wishes on a wooden board, and they're supposed to come true !"

"The number of foreign visitors has been multiplied by 5 in 5 years, reaching the figure of 11,100,000 per year," says Hirofumi Yoshimura. "What we would like is that the Expo publicizes all the wealth of Osaka around the world. We really want that to happen."

Beautiful by day, incredible at night, Osaka is also one of the best places for Japanese gastronomy. Kappo cuisine. for example, proposes menus in what looks like a very basic restaurant, but in fact it serves the most elaborate dishes in Japanese cusine.

"You can enjoy the fine dining more casually. And it started in Osaka. So, it’s a little cheaper and the dishes reflect the seasons, and a lot of the dishes and ingredients are locally sourced and that's what makes it very special. For example this sweet potato cooked in lemon sauce, is from Kowachi, an area in Osaka."

Osaka never stops living and the heart of this endearing megacity will continue to beat very hard, while waiting for the announcement of the host city of the expo, on November 23th.