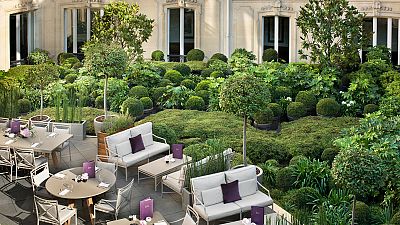 There aren’t many more evocative streets than the Champs-Élysées. The name itself is a giveaway, ‘the Elysian Fields’ being a bold name to give to any street, no matter how impressive. Originally a bunch of fields and kitchen gardens, it was in 1667 that landscape architect and gardner to King Louis XIV, André Le Nôtre, set out the promenade in a more ordered fashion. Over the years, the Champs-Élysées grew to become one of the most fashionable and famous streets in the world, surviving revolution, war and the throng of tourists that pound its historic pavements every day.

Straddling the corner of the Champs-Élysées and Avenue George V is Le Fouquet’s. The most famous of the area’s once-common Belle Époque bistros, Fouquet’s is the archetype for French brasseries. Opened in 1899 by Louis Fouquet, it quickly became a central destination for both the equestrian set and the burgeoning, romantic world of aviation.

Of course, this brought with it the stars of film and politics. Even now, Fouquet’s plays host to the gala dinner of the annual César Awards, France’s glamorous answer to the Oscars, and Nicolas Sarkozy celebrated his 2007 electoral victory in its chic surroundings. Lining the walls of the reception and intimate bar areas, therefore, are photos of the great and good who have enjoyed a steak in the restaurant or a stay at the adjoining hotel. It’s an eclectic mix, from Sophia Loren, to Frank Sinatra, to Keanu Reeves - it just goes to show that Fouquet’s legend runs deep.

In 2006, the owners of Fouquet’s, the Barrière Group (one of very few major companies in France still majority-owned by the family that founded it), opened Hotel Barrière Le Fouquet’s Paris, with the brasserie at its heart. The building, formerly owned by the government of Kuwait, has been completely renovated by architect Édouard François and interior designer Jacques Garcia, and it recently underwent another set of refurbishments. You can tell - the light colour palette and airy feel to the rooms is a refreshing contrast to the traditional luxury of downstairs, with its red velvet, mahogany and brass.

As luxurious and indulgent as Le Fouquet’s is, it’s difficult to stay hidden away too long, as one foot outside the hotel lands you within view of the Arc de Triomphe. The view from the top is arguably the best in Paris. There are two reasons why the view is better than that of the Eiffel Tower. Firstly, the arch’s location in the middle of 12 boulevards creates a beautiful symmetry, overlooking the bright white facades of Paris’s famous townhouses.

Secondly, the view is completed by the fact that you can actually see the Eiffel Tower, as opposed to having to stand in it. If you decide to take in dinner before meandering to the Arc de Triomphe, make sure you don’t enjoy it too much - the official closing time is 23.00, but the helpful ticketing staff shut up shop at 22.15.

Dinner is a very French affair. For the full experience, try the garlic Burgundy snails (succulent), tenderloin steak (with Champs-Élysées sauce), and profiteroles (indulgent), washed down with Fouquet’s Brut. I got a little carried away and also had the oysters from Frère Besson, which were completely unnecessary and absolutely delicious.

If you fancy venturing further afield, it’s a half-hour walk to the Eiffel Tower or Les Invalides, and a 20-minute metro ride to Île de la Cité or Le Marais, from George V metro station right outside the hotel. Driving times vary, depending on traffic and how charitable local drivers are feeling. A must is the magnificent Sainte Chapelle, the royal chapel within the Palais de la Cité.

Built between 1242 and 1248 during the reign of Louis IX - the future Saint Louis - to house his Passion relics (including Christ’s Crown of Thorns), the Gothic masterpiece was left to ruin after the French Revolution, and actually became administrative offices before early restoration in 1836, and final, painstaking touches to the stained glass in 2008, in time for the 800th anniversary of Saint Louis’s birth. It’s truly one of Europe’s wonders, a sublime example of Gothic architecture and masterful stained glass construction.

There are myriad ways of finishing a night in Paris, but if you feel like sticking close to home, Le Fouquet’s offers a second restaurant. Le Joy is akin to a secret garden on the hotel’s first floor, a space of calm in one of Paris’s busiest areas. Le Joy has recently collaborated with Champagne powerhouse Verve Clicquot to redesign the space with the its signature orange colour scheme, and the maison will be in residence until mid-September.

As the hotel itself somewhat confidently states, the essence of Paris has an address. As I sit down at the bar with my notebook and an Old Fashioned, I realise that I’m not one to argue.