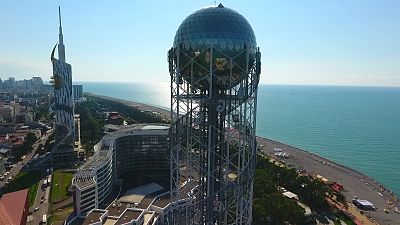 Batumi is Georgia’s third largest city and the capital of the autonomous Ajara region. Its relentless 10-year urban transformation has helped turn the city into one of the Black Sea’s top attractions.

Batumi Boulevard is its life and soul. It fronts the main beach, and stretches 8 kilometres along the coast. It tells a lot about the city’s touristic development.

“20 years ago the situation was unbelievably different from now, explained blogger Davit Trapaidze. “Batumi was a buffer zone for NATO member Turkey – so there were lots of soldiers here and you couldn’t swim freely for a couple of kilometres from Batumi beach. Now things have changed from black to white,” said Trapaidze.

“The Georgian alphabet is unique, it comes from the third century BC. Every sound corresponds to a letter,” said Tchitchileishvili. “The alphabet had three steps of development and each one is inscribed on UNESCO’s list of Intangible Cultural Heritage. The tower has a DNA shape, meaning the alphabet is the Georgian genetic code.”

Europe Square shows the new face of old Batumi. It was named after Ajara joined the Assembly of European Regions.
It consists of renovated belle époque buildings, and new ones in similar style. Towering over it all is the monument of Medea, the woman who according to Greek mythology helped bring the golden fleece to Greece.

Remains of the day

Writer Shota Gujabidze said: “the history of Batumi as a toponym started about 2,500 years ago. Aristotle himself mentioned it. The construction of Batumi as a modern urban city started in 1878.”

“Some buildings are obviously new, they were built 5-10 years ago. But there are also old buildings kept in this neighbourhood, which were built towards the end of the 19th century. Some are from the start of the 20th. And if Batumi has a sort of an old charm – I think it’s thanks to these buildings,” added Gujabidze.

After our morning tour, we decided to take a break. We wanted the feel of a Georgian home in a modern environment, so we had lunch at FanFan. It’s a cosy, shabby-chic restaurant situated in an historic building. Here traditional dishes have a contemporary touch:

FanFan’s owner David Danelia sat down with us to break some bread: “A typical Georgian set of vegetarian starters contains the traditional Lobio, beans cooked with spices and presented in a clay pot; traditional elarji, made from coarse cornmeal, cornflour and sulguni cheese cooked à-la polenta style.”

Drive out of Batumi, and nature takes over. Batumi’s Botanical Garden, 8km northeast of the city, is well worth a visit. It’s one of the biggest in the world, and it features flora from nine of the world’s key eco-systems.

Developing infrastructure in different areas and domains is part of the local government’s strategy to prolong the tourist season.

Zurab Pataradze, head of the autonomous Republic of Adjara told Euronews that tourism is very important for the region.

“We are also working on developing ski tourism, agricultural tourism, rural and also extreme-sports tourism, which are all very good for developing our country.”

Investment in the region has brought a rash of casinos and hotels. Indeed some tourists have already begun calling Batumi, the Las Vegas of the Black Sea.