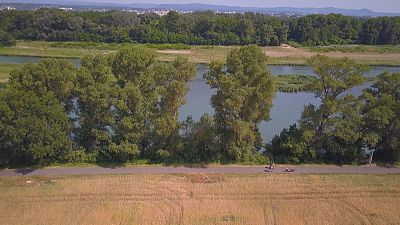 In this episode of Life, we cycle along the ViaRhôna, an 800-kilometre bike path stretching from Geneva to the Mediterranean, following the route of the river Rhône – making a few stops to taste nougat, go canoeing, and check out the local Roman history.

We set off from the market town of Seyssel, heading down to Chanaz, in the foothills of the French Alps.

Really loving the hand-crafted handlebar bag from #CyclesGillesBerthoud for my cyclotourism report on #ViaRhônapic.twitter.com/veiAcy82sg

Chanaz is a historic village: traces of pottery have been found here dating from over 2,600 years ago. Later it became an important site for Gallo-Roman ceramic production. To find out more, we popped into the town’s Gallo-Roman Museum, set in a 15th century Gothic chapel and dedicated to the potters of Portout.

“The potters set themselves up in Chanaz because it’s ideally located, on trading crossroads. They could sell their ceramics along the Rhône, and bring back from the Mediterranean amphoras in which we’ve found wine, oil and other provisions,” said curator Marie Maréchal.

Talking about provisions, there’s always time for a coffee when you’re cycling, and at the Brûlerie de Chanaz, they roast their own.

While the cameraman films the coffee, I drink the coffee! At Brûlerie de Chanaz on route of #ViaRhônaeuronews</a> <a href="https://t.co/BSD2YWVzde">pic.twitter.com/BSD2YWVzde</a></p>— Jeremy Wilks (WilksJeremy) June 14, 2017

From pedaling to paddling

From there. the ViaRhôna wends its way south and west along the valley floor.

The ViaRhôna is part of EuroVelo, the network of long-distance international bike paths being developed across the continent.

For those who like to mix their sports, this part of France has plenty to offer – including the chance to switch from pedaling to paddling. Philippe Millet, director of Vertes-Sensations, takes us along for a canoe ride.

The ViaRhôna follows where the river flows, including a stretch of bike path in France’s third biggest city – Lyon. Here the ViaRhôna and the Rhône go right through the heart of the city, joining up with the river Sâone and then heading south towards Provence.

Our next focal point is around Montélimar – and that will be our last stop, but like the river, the path continues, through Avignon and Arles, through the Camargue, and down to the Mediterranean.

A boost to tourism

Over half the ViaRhôna is on car-free bike paths, the rest on quiet roads, so it suits all kinds of users. Among the regulars is Eric Bourry, president of Handisport Montélimar, who pedals his handbike along the path several times a week.

“ViaRhôna is all about safety. It allows me to go handbiking on my own, or with friends, and it’s secure, it’s really peaceful,” he says.

Montélimar is famous for its nougat, and near the ViaRhôna we popped in to the Arnaud Soubeyran museum and kitchen. This family-run business exports all around the world, but strives to use locally sourced honey and nuts to make its nougat as authentic as possible.

“We work above all with local producers. Both because we think it’s pretty normal – if we want honey to keep on being produced in our area, then we have to buy it – and also because we believe, with a bit of patriotism, that our honey is the best!” says Didier Honnoré, manager of Nougat Arnaud Soubeyran.

The ViaRhôna project has been shown to be a boost to local tourism, as cyclists spend more time – and money – in the region.

“A tourist on the ViaRhôna spends a lot more than a tourist in a car. A tourist in a car spends on average 45 euros per day. A tourist cycling here spends 70 euros a day – so it brings business, and it promotes our great region, especially the Rhône valley,” says Nicolas Daragon, vice-president of the Auvergne-Rhône-Alpes Region.

Sheki and Lahij: a journey into the heart of Azerbaijani heritage

What does the falling pound mean for your next holiday?

Spain digital nomad visa: Everything we know so far

LGBTQ+ travel: This airline has relaxed its gendered uniform rules