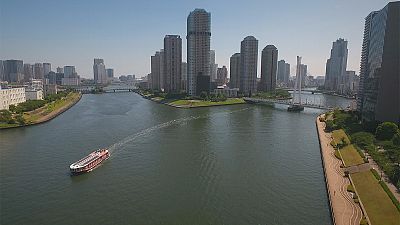 The Japanese capital is the destination for our new edition of Metropolitans.

This global metropolis has many different faces and some of them may be surprising to discover. What about Tokyo by water for example?

Euronews’ Seamus Kearney reported: “Hundreds of years ago Tokyo was often referred to as the water city, until the focus shifted to the modern urban expanse that we know today.

“But now there’s a kind of renaissance movement underway, reconnecting the citizens with the many rivers, canals and waterways.”

Several major rivers flow through Tokyo, including the famous Sumida river, and there are more than a hundred when the medium and smaller ones are counted.

It was in the 17th century, when Tokyo was known as Edo, that everything was built around the water, with an important river transport network that helped the city to grow.

Professor Hidenobu Jinnai, from the Engineering & Design Faculty at Hosei University, told Metropolitans: “The urban life of the citizens and most of the urban activities were deeply connected with water. We can say Tokyo really was a water city, just like Venice.

“But people forgot this aspect for a long time. Fortunately, in recent years, people are rediscovering this charming point of Tokyo as a water city.”

In the past many canals and rivers were covered over or diverted, with less attention paid to waterside attractions.

But now that is changing, with regeneration projects underway, including the upgrade of historic bridges.

Open public spaces are being created, and those near the water are proving increasingly popular.

Inner-harbour beach activities are now a common sight in some parts of Tokyo, with long stretches of new promenades.

One woman carrying a young baby at Odaiba told Euronews: “As there’s a place for a barbeque nearby we often organise one. Compared to the city centre, here there’s a really nice breeze.”

Another woman said: “There are school events here where the kids make sheets of nori seaweed by the sea.”

Also among those happy to see a new spotlight on Tokyo’s water is a man who is the fourth generation in a family of fishermen.

Yuji Maru says the water quality is improving and he is glad to help keep alive the city’s strong tradition of fishing.

“When I have a really good day catching lots of fish I’m so happy that I go home with a smile on my face,” he told Euronews. “I’m very happy all day long.”

Yuji also brings in a lot of shellfish including what are known in Japanese as Hamaguri, Asari and Shijimi.

“I decided to choose this job because I love boats and fishing at sea. I’m glad I became a fisherman.

He added: “My son is the fifth generation and I hope he takes over the family business in the future.”

The past is also being kept alive with the sight of the traditional yakatabune river boats and their red lanterns around Tokyo.

People are given the chance to step back in time with evening dinner cruises.

Archive paintings and pictures are also testament to the evolution of Tokyo as a water city and they serve as a reminder about how today that strong connection can be restored.

Professor Jinnai told Metropolitans: “In the first half of the 80s, in the post industrial society, water became cleaner, factories and warehouses were converted into art galleries, and cafés and restaurants.

And just outside the city there is also something for the more adventurous.

Trying out a kayak for himself, Euronews’ Seamus Kearney reported: ‘‘Here at Okutama, west of Tokyo, we’re on the Tama river, which actually flows through the capital. It’s the perfect place for those wanting to do water sports including canoing, rafting and kayaking.

“And there’s expert help on hand for those who really have no idea what they’re doing,” he said. “Okay, let’s give this a go; the main thing is not to fall in!”

It is in areas like this that people can really take the time to discover the beauty of the major rivers and their natural surroundings, away from the bustle of the city.

Moe Kaifuchi, a local water sports instructor, told Euronews: “In Okutama you can really feel right up close to nature. I think the water, the vegetation and the sky are very attractive here.”

Meanwhile, back in the city, Tokyo is gearing up to be the host of the 2020 Olympics and Paralympics.

New facilities are planned and services such as water taxi boats are being trialled.

Hajime Tabata from the Tokyo Water Taxi company told Metropolitans:
“We only have two taxi boats at the moment but there are plans to have 60 in the years to come. Our aim is to develop these boats in terms of commuter transport.

He added: “At the moment there are only seven available quays. But if that number goes up in the future the taxi boats will be more appreciated and recognised.”

Professor Jinnai said: “The transportation system for people, with ships and boats, is fundamental. And mixed-use, multi-purpose areas should be created.”

In other words, making sure that everyone can benefit from the waterfront.

And finding a unique way of further developing Tokyo as a water city is just one of tomorrow’s challenges.