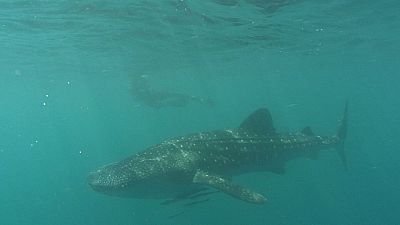 The same weight as three elephants, and the same size as a city-bus, the whale shark is the largest fish in the world. In the third part of our ‘Philippine Life’ series we headed to Donsol, in the south of Luzon Island, in search of these gentle giants.

World Wildlife Foundation (WWF)expert, David N. David, has the lucky job of interacting with the butanding, as the whale sharks are known here, on a daily basis. For him, every interaction is a unique, almost healing, experience: “They are gentle and when you swim with them you can forget the outside world.”

Despite their colossal size, whale sharks are fish, not mammals. And whilst their enormous frames may give the impression they eat anything and everything, in actuality, they like nothing more than a platter of fine plankton. As Butanding Interaction Officer, Elmer Quizon, explains: “Although they have a large mouth, more or less two meters wide depending on their length, they don’t have the capability to swallow big objects even like us because their throat is so narrow.”

The discovery of whale sharks here has drastically altered life for locals in the region. A decade ago, the WWF and local authorities implemented a policy of community-based eco-friendly tourism. For butanding spotter, Joey Aquino, the change has been a welcome one: “The whale sharks changed Donsol in a way that they provided a livelihood to unemployed people, especially those fishermen who had previously only relied on fishing.”

Given relatively little is known about the whale shark as a species, protecting this endangered fish is a difficult process. David goes out to sea almost every day to take pictures, uploading them onto a database in order to track their movements. Each whale shark is clearly identifiable thanks to their unique patterns. Because their skin resembles a starry sky, scientists use an adapted version of the software developed for the Hubble Space Telescope to determine who’s who underwater. As David explains: “The main activity here for the WWF is the whale-shark photo ID. It’s about estimating how many whale-sharks are aggregating in Donsol every season. Every individual whale-shark has his own unique pattern. So it’s just like fingerprints for human.” Nearly 400 whale sharks have been identified in Donsol in the past six years.

And why is Donsol Bay such a hot-spot for whale sharks?

The answer is Mount Mayon, one of the Philippines’ many active volcanoes. Come monsoon season, rich minerals flow down the volcano via the Donsol river, into the ocean. They feed the mangroves, which feed the plankton, which leads to an ‘All-you-can-eat’ buffet for sea creatures, who flock to the surrounding area.

To add to the diversity, this is an area which sits at the epi-centre of the ‘The Coral Triangle’ – a highly complex ecosystem, located in the Indo-Pacific Ocean. The corals attract both the little and the large, creating a colourful nursery of different species.

In the next, and final, edition of our ‘Philippine Life’ series, we explore the country’s UNESCO-protected cultural heritage, going back in time to visit the 2000 year old rice terraces of Banaue, the former Spanish colonial town of Vigan, and Paoay’s centuries old baroque church.

Special thanks to www.toppx2.dk for providing the footage