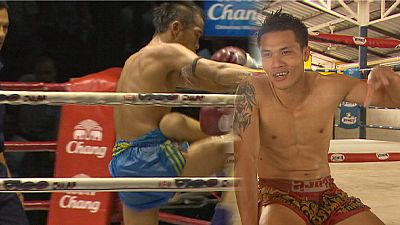 Muay Thai means the art of eight limbs. According to legend, Muay Thai helped maintain Thailand’s independence. And being a champion today means national adoration and lots of money. The fascination of Muay Thai – in this edition of Thai Life.

Muay Thai – the ‘Art of Eight Limbs’ is deeply rooted in the history of Thailand. Thai Boxing is not just a sport but an integral part of Thai culture. In the last edition of our four-part series of ‘Thai Life’ we step into the boxing ring and delve into the nations’ fascination with Muay Thai.

It is the Mecca of Muay Thai and the dream of every Thai boxer to fight here one day. Only the best make it to the legendary Lumpinee Stadium. The boxers prepare for several weeks ahead of a fight in the stadium.

“The atmosphere in the Lumpinee Stadium is louder than in boxing stadiums in the countryside. You hear the cheerful shouts from the audience; this gives us even more energy. You can really feel the energy.“

Karim Detdiew, who is 29-years-old, has fought in the Lumpinee Stadium many times. He started Muay Thai at the age of eight.

For many it is a way out of poverty – also for Karin. He is a member of the Yodtong Boxing Camp in Chonburi, southeast of Bangkok – one of the most famous camps in the country.

It was founded by Kru Yodtong who is nothing less than ‘The Official Master of Muay Thai’ in Thailand. His secret: its not merely power that makes you a champion, its the right technique.

“This is a martial art and its very technical. You need to apply the techniques the way you have been trained. The coach must train the fighter not only in boxing but also the tradition of this martial art. If you use only power you can’t win, you need to learn the right technique,” he explained.

No one has generated more champions than this 70 something master. His goal is to pass on his knowledge of the martial art.

Muay Thai has a long history. Records of fights only date back 700 years but the history of Muay Thai began over 2,000 years ago.

Since the end of the 13th century, warriors were taught by monks who specialised in unarmed fighting. According to legend, Muay Thai helped to keep the country’s independence.

Today there are rules: At most, five three-minute rounds alternating with two-minute breaks. Fists, knees, feet, hands and elbows are all allowed.

Boxers train about six hours a day, six days a week in the blazing heat – until the movements become instinctive.

This is not for the faint-hearted – it demands sacrifice.

“You must have passion and train hard. You must have great ambition. You really have to love Muay Thai and work hard. To be where I dreamed of now, I’ve been through many things,” said Karin.

Muay Thai is Karin’s purpose in life. After the end of his career he wants to become a coach and has already begun teaching. He trains Tomas Holik from the Czech Republic. Like many foreigners, the 33-year-old came to the country to learn Muay Thai in its birth place.

“I’m here for Muay Thai because it’s a very healthy sport, it´s the best sport for stamina, for the physique and for the brain and for the heart,“ Holik told euronews.

But Muay Thai is not only a sport. Traditions, cultural values and symbols play an important role too – like the Mongkon, a ceremonial rattan headband which protects the fighter.

Before every fight the boxer performs the so-called Wai Khru. The purpose is to pay tribute to the teacher, parents and one’s religion.

Thailand want Muay Thai to become an Olympic discipline – its application is currently under review at the International Olympic Committee.

That was the final story in our four-part series ‘Thai Life’.

If you want to catch any of our reports again, check out our website at http://www.euronews.com/programs/life