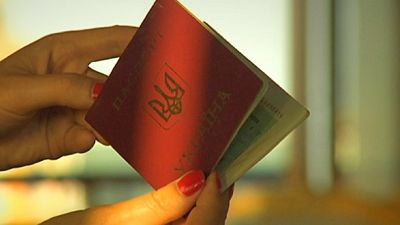 When it comes to relations between Ukraine and the European Union, one big issue in Kiev is the on-going controversy over EU travel visas.

Everyday Ukrainians line up outside the likes of the Polish and Czech embassies, hoping to get their hands on a bit of paper that gives them free movement in the Schengen zone. But many are hoping that one day all of that will change.

As part of an action plan with the European Union, Kiev is attempting to meet strict conditions for the lifting of EU visa requirements.

Outside the Czech embassy a man planning a third trip to Prague to visit family explained how proving the purpose of his visit was difficult the last time he applied.

“It is as if they thought I was going to stay there and work illegally,” he said.

Europe Without Barriers, an umbrella group of numerous NGOs, is helping to fight for an EU no-visa regime. It admits the government has work to do to improve border security and migration controls. However, it says the NGOs are also having to help tackle what it describes as stereotypical attitudes among some EU members.

“It is known that Ukraine has its supporters of visa liberalisation, but at the same time there are those who are afraid of it and those who are critical of it,” explained Iryna Sushko from Europe Without Barriers.

But before visas can be lifted the EU says real concerns about illegal migration, trafficking and false documents must be addressed.

It says Ukraine’s vast borders, especially to the east, are permeable, and trafficking and illegal migration from other countries pass through.

But is Brussels optimistic its conditions can be met?

“This is quite a comprehensive and complex situation. Ukraine has a lot to do in terms of implementing these requirements of the action plan. And therefore I think we should have this in mind. There have been some positive steps already taken,” said José Manuel Pinto Teixeira, EU Ambassador to Ukraine.

Whether those steps are enough remains to be seen though; a progress report from Brussels is due in the coming weeks.

Meanwhile, local NGOs say they are monitoring attitudes and practices at EU embassies, saying the number of long-term and multi-entry visas are too low.

Seamus Kearney, reporting from Kiev for euronews says: “Many travellers also complain that success in obtaining an EU visa largely depends on each individual embassy – and they say the approach is far from uniform.”

However, the European Union says it has attempted to make the whole process more transparent, simpler and cheaper for Ukrainians. It also says the rate of visa refusals at EU embassies is now down to about four percent.

Among those dreaming of an end to the long wait for visas are foreign companies operating in Ukraine. Two employees from the logistics company GEFCO outlined the difficulties.

“Very often a truck that carries goods can remain idle for up to three weeks while the transport company waits to get a visa for its driver,” explained Igor Loskutov, the company’s Road Transport Coordinator.

Aleksandr Levchenko, Purchase and Quality Manager at GEFCO said: “Business is very dynamic and it rapidly changes, and the need to travel sometimes happens at the last minute.”

It is a message Ukrainian politicians are only too aware of, as they continue to try to boost border security with practical and financial help from Brussels.