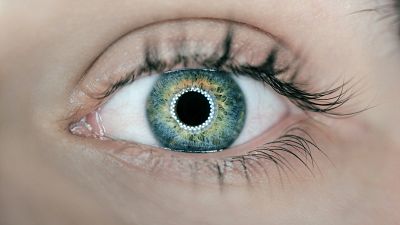 Heart disease is the leading cause of death globally with an estimated 17.9 million people dying from it each year, according to the World Health Organization (WHO).

The WHO says that early detection of heart disease - which often leads to heart attacks - could give patients precious time for treatment, which could save many lives.

Now researchers have found a simple eye test could be used to diagnose heart disease with the help of artificial intelligence (AI) and machine learning.

Previous research had investigated how the retina’s network of veins and arteries could provide early indications of heart disease.

That research looked at how the width of these blood vessels could be used to predict heart disease, but it wasn’t clear if the findings applied equally to men and women.

Researchers at St George’s, University of London, used an AI model to study a database made up of patients from two studies in the UK and Europe, to predict the future risk of cardiovascular disease.

Using retinal images from 88,052 UK Biobank participants aged 40-69, QUARTZ first looked specifically at the width, vessel area, and degree of tortuosity (or curviness) of the arterioles and venules in the retina to develop prediction models for stroke, heart attack, and death from circulatory disease.

They then applied this model to the retinal images of 7,411 participants aged 48-92 from a second study by the European Prospective Investigation into Cancer (EPIC)-Norfolk.

Overall, these predictive models - based on age, smoking, medical history and retinal vasculature - captured between half and two thirds of circulatory disease deaths in those most at risk.

The QUARTZ results were compared to the Framingham Risk Scores framework, a tool currently widely used to predict risk of heart disease, based on health data.

Framingham, however, captured more cases of heart attacks among those most at risk.

In men, arteriolar and venular width, tortuosity, and width variation emerged as important predictors of death from circulatory disease.

The researchers said that while adding eye scan modelling to the Framingham Risk Scores only had a marginal effect on the prediction of stroke or heart attack, it is a simpler, non-invasive procedure without the need for blood tests or blood pressure measurement.

The authors of the study wrote that, as retinal imaging is already common practice in the UK and the US, “AI-enabled vasculometry risk prediction is fully automated, low cost, non-invasive and has the potential for reaching a higher proportion of the population in the community because of ‘high street’ availability and because blood sampling or [blood pressure measurement] are not needed”.

“In the general population it could be used as a non-contact form of systemic vascular health check, to triage those at medium-high risk of circulatory mortality for further clinical risk assessment and appropriate intervention”.

In the UK, for example, it could be included in the primary care NHS Health Check for those aged 41-74, they suggested.

The results are published in the British Journal of Ophthalmology.

In an accompanying editorial, Drs Ify Mordi and Emanuele Trucco of the University of Dundee, Scotland, explained that the use of retinal vasculature changes to inform overall cardiovascular risk is “certainly attractive and intuitive,” but is yet to become part of routine clinical practice.

“Using retinal screening in this way would presumably require a significant increase in the number of ophthalmologists or otherwise trained assessors,” they wrote.

“What is now needed is for ophthalmologists, cardiologists, primary care physicians and computer scientists to work together to design studies to determine whether using this information improves clinical outcome, and, if so, to work with regulatory bodies, scientific societies and healthcare systems to optimise clinical workflows and enable practical implementation in routine practice,” they concluded.

Can genetically modified mosquitoes fight the spread of malaria?

A new form of herpes virus can fight advanced cancers. Here’s how