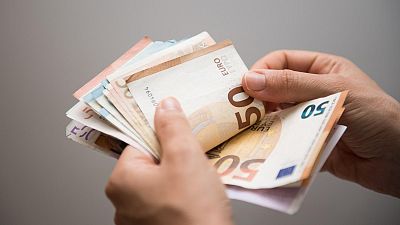 The September estimate sees prices for food, alcohol and tobacco, non-energy industrial goods, and services all up on the numbers in July and August when annual eurozone inflation was forecast at 8.9 per cent and 9.1 per cent respectively.

The September estimate from Eurostat has energy inflation at 40.8 per cent, up over two percentage points compared with 38.6 per cent in August.

Inflation in Latvia and Lithuania also hit 22.4 per cent and 22.5 per cent respectively.

The Netherlands saw the biggest monthly increase in prices, jumping from 13.7 per cent in August to 17.1 per cent in September.

Elsewhere, the UK’s inflation rate has surged to a 40-year-high of 10.1 per cent in July, the Organisaton of National Statistics (ONS) reported on August 17.

Rising food prices made the largest upward contribution to annual inflation rates between June and July, the UK's national statistics body said amid the highest inflation hike since 1982.

The eurozone's inflation is up from 7.4 per cent in April, as Europeans continue to see soaring energy and food prices fuelled in part by Russia’s war in Ukraine.

The preliminary estimate for September is the highest since recordkeeping for the eurozone began in 1997.

Every corner of the continent is facing rising prices, with Europe's expected economic bounceback from the coronavirus pandemic being hampered by a number of factors.

Here is a look at the inflation rate in each country in Europe:

Following in the footsteps of its counterparts in other parts of the world, in July the European Central Bank raised interest rates for the first time in 11 years by a larger-than-expected amount, as it targets stubbornly high inflation.

This was followed by another record rate hike in September, raising new questions about whether the rush to make credit more expensive and keep inflation in check will plunge major economies into recession.

Europe and much of the wider world were already being hit with soaring energy prices - which contribute to inflation - before Russia’s invasion of Ukraine in late February.

The conflict has exacerbated the energy crisis by fuelling global worries it may lead to an interruption of oil or natural gas supplies from Russia. Moscow said in September it would not fully resume its gas supplies to Europe until the West lifts its sanctions.

Russia has lately been the EU's top supplier of oil, natural gas, and coal, accounting for around a quarter of its energy.

The prices of many commodities - crucially including food - have also been rising ever since COVID-19 pandemic lockdowns were first introduced two years ago, straining global supply chains, leaving crops to rot, and causing panic-buying in supermarkets.

The war in Ukraine again dramatically worsened the outlook, as Russia and Ukraine account for nearly a third of global wheat and barley, and two-thirds of the world's exports of sunflower oil used for cooking. Ukraine is also the world's fourth-biggest exporter of corn.