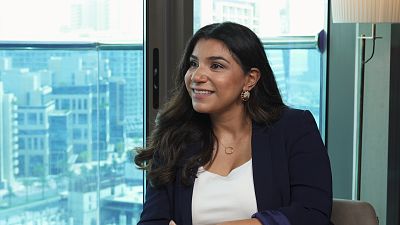 The Dialogue sits down with inspirational people from across the globe with links to the Middle East and North Africa. Guy Shone explores what drives these extraordinary individuals.

Zainab Kufaishi may be behind the helm for Invesco's Middle East and African region, a company that looks after more than a trillion and a half dollars' worth of investments. However, her life has not been without its challenges. It has been a combination of hard work, natural intelligence, and the confidence her parents instilled in her that has contributed to her success.

Growing up in the 80s in Bagdad was a yin and yang experience. Speaking to The Dialogue, Zainab says, on the one hand, it was "a very prosperous country" where she had a "relatively privileged middle-class life." On the other she explains, "with a dictator at the helm…my parents couldn't really say anything about the regime in front of me at home, in case I would say something at school."

That middle-class life was soon to come crashing down. After years of conflict with neighbouring Iran, Iraq was still healing its wounds when Saddam Hussein invaded Kuwait, and the First Gulf War broke out. The Kufaishi family initially stayed put, but as the war faded, life became more complex, and Zainab's parents decided it was time to leave.

After initially travelling to Algeria, the family eventually landed in the UK. Her parents worked firstly as researchers at universities, but when the grants dried up, they reinvented themselves. "They became TV presenters and researchers…they started their own business called Dr Internet, which was looking at advising patients online, so really ahead of its time."

On arriving in the UK at the age of 11, Zainab spoke no English and was bullied at school. "It was a strange sort of experience," she says, clarifying, "because I didn't speak the language and so I didn't understand why they would bully someone like me."

Zainab's response was to focus on her studies to make her parents proud. She worked hard at fitting into her new environment. "You acclimatise to the culture. You pick up cues," she explains.

As she approached University age, Zainab's thoughts centred on studying politics. That is until her mother intervened with what turned out to be excellent advice.

"Because of my experience and my heritage I was drawn to international politics, diplomacy in particular."

"Because of my experience and my heritage, I was drawn to international politics, diplomacy in particular," she outlines. "My mother said, 'I think that's a good choice, although couple it with economics.'"

Zainab fell in love with finance. "I was very drawn to behavioural finance in particular and the way human psychology can influence markets."

In a world traditionally dominated by men, Zainab's ascendancy to the top of her game attests to her natural-born abilities and determination. She points out, "I didn't let any barriers, any self-inflicted barriers, get in the way." It's clear nothing would have held her back.

Zainab says the industry still has a long way to go, she says, but is also clear those who championed her successes were "mostly men". Zainab's position as a leader in business enables her to advocate for future generations of women.

"I have…a responsibility," she says. However, Zainab cautions a career in finance is not always an easy choice for women. "I have a family...and I think it's important to see that that balance can be achieved," but there's a but, "It's probably more a juggle."

As a former refugee, Zainab has always felt deeply connected to others displaced by conflict despite her career success. In 2016, the world saw images of hundreds of thousands of people who had fled Syria. For Zainab, this was a calling.

Zainab volunteered at a refugee camp in Greece, where she was one of the few Arabic speakers. That was a source of comfort for those who had fled Syria, taking with them only what they could carry.

The conditions at the camp were more than problematic. Zainab coped by writing a blog allowing her to digest what she was experiencing. She left the camp after a month but has remained involved in the organisation which helped refugees at the Softex camp and with the families she befriended there.

Zainab continues to be a passionate and prolific campaigner. Whether that’s for refugees, women, or small businesses in Iraq, where she works with an Angel Investment firm.

She may have never been back to the country that birthed her, but Zainab is sure Iraq has potential, and she wants to do what she can to foster that. "I see some really exciting, bright spots, especially in the younger generation," she says.

Zainab's goal is to help Iraq diversify away from the hydrocarbon energy sector. For that to be successful, she says, investors like herself must take a chance.

Born to lead: Western Australian Premier on how his convictions get him through tough times

Battling to be the best: ONE Championship CEO's fight to succeed