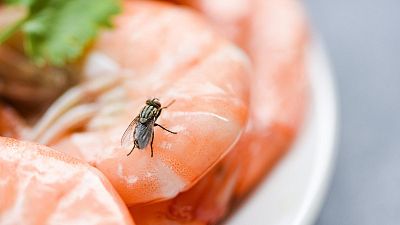 Flies typically vomit on food before they consume it, leaving behind traces of what they have previously eaten like faeces or sewage.   -   Copyright  Canva
By Luke Hurst  •  Updated: 22/09/2022

Warning: if you’re about to tuck into some food, this may ruin your meal. Did you know, when flies land on food to eat some of it, they vomit on it first?

This vomit contains traces of whatever they had previously eaten, whether that was a bit of someone else’s lunch, or something much less savoury, such as dog poo.

Now scientists are warning we should be much more alert to the risks associated with the common house fly and their vomit on our food.

Researchers at the University of Massachusetts Amherst looked at the risks associated with "synanthropic" flies, those common flies that do not bite us and live with us.

They say that while scientific research has remained focused largely on biting flies like mosquitoes as harbingers of disease, spreading it by transferring infected blood from a host to host, these synanthropic flies could pose an even greater threat.

"I’ve been working on synanthropic flies since I was a graduate student in the 1960s," said John Stoffolano, professor of entomology at UMass Amherst’s Stockbridge School of Agriculture, who is the author of the research published in the journal Insects.

"And synanthropic flies have largely been ignored. Blood-feeding flies have taken the limelight, but we should pay attention to the ones that live among us because they get their nutrients from people and animals that shed pathogens in their tears, faeces and wounds".

What flies consume before they land on your food

He explained that the common house fly flies around nibbling on different types of highly unsavoury food, which could include things like roadkill, animal poo, rotting rubbish, and sewer water.

It’s the little things that cause the problems. Our health depends on paying closer attention to these flies that live with us.

When it eats, it fills its crop - which Stoffolano said "is like a gas tank" - but it is a place for storage, not for digestion, so there are few digestive enzymes which would normally destroy most pathogens.

The crop is "a place to store food before it makes its way into the digestive tract where it will get turned into energy for the fly," he said.

When the fly wants to eat a new bit of food, it regurgitates liquid from its crop onto the food’s surface as part of its eating process.

According to Stoffolano, because of the nasty things flies store in their crop, it can inadvertently become a place to store disease-producing pathogens.

Even worse perhaps, the crop is also a place where microbes develop antibacterial resistance, which could spell disaster for humans who get infected by a pathogen.

"It’s the little things that cause the problems," Stoffolano says. "Our health depends on paying closer attention to these flies that live with us".

The authors of the paper warn that the area needs "a lot of focused study" as currently not enough is known about the significance of flies regarding the spread of disease and potential antibacterial-resistant microbes.

Tesla is set to unveil its 'Optimus' humanoid robot: What we know