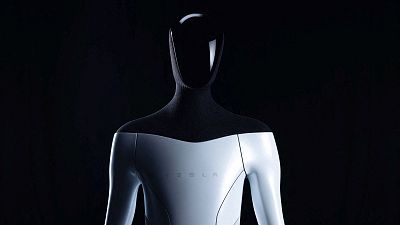 Musk said at a TED talk robots could be used in homes, making dinner, mowing the lawn and even becoming a "buddy" or a "catgirl" sex partner.   -   Copyright  REUTERS
By Roselyne Min  with Reuters  •  Updated: 21/09/2022

In just about nine days we should be able to find out more about Tesla’s first prototype of a humanoid robot.

CEO Elon Musk said last year that Tesla was preparing to launch a humanoid robot that could replace boring, repetitive factory jobs and potentially even become our significant others.

The prototype is expected to be revealed on September 30 at the company’s AI Day event. Its name, Optimus, is a nod to the powerful leader of the Autobots in the Transformers series.

According to Tesla’s recent job postings, the company plans to develop and produce thousands of humanoid robots – eventually millions – around the world in the future.

The prototype will be around 1.73 metres tall and the production is expected to start next year.

Musk previously said it was important to make the machine not "super-expensive".

However, he has also predicted the robot business may eventually be worth more than the revenue Tesla makes from its electric cars.

But robotics experts are sceptical about the billionaire entrepreneur’s plans for widespread use of humanoid robots, unless Tesla can roll out robots that do multiple, unscripted actions.

"It's all part of distracting people and giving them the next shiny object to chase after,” Guidehouse Insights analyst Sam Abuelsamid told Reuters.

Other automobile manufacturers such as Honda or Hyundai's Boston Dynamics unit have been developing humanoid robotics for decades.

However, like self-driving cars, the robots have trouble with unpredictable situations.

“Self-driving cars weren’t really proved to be as easy as anyone thought. And it’s the same way with humanoid robots to some extent,” the lead of NASA‘s Dexterous Robotics Team, Shaun Azimi, told Reuters.

How was your day? This robot might finally get children to answer