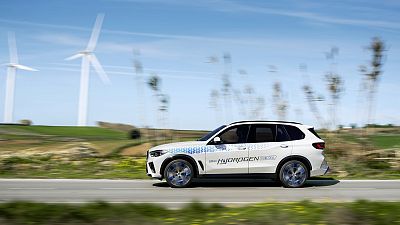 Sales of battery electric cars (BEVS) are on the rise across Europe and according to the annual Global Electric Vehicle Outlook, more are sold each week now than in the whole of 2012.

But despite the increasing popularity, shortages of key components for batteries, including lithium, nickel and cobalt, could threaten supply. So, is it time to focus on hydrogen-based energy?

In contrast to Europe where there are only a handful of hydrogen cars for sale and around 228 refueling stations, Asia is betting on hydrogen.

The Japanese government plans to have 800,000 hydrogen vehicles on roads by 2030 while China has set an ambitious target of 1 million by 2035.

These early movers are likely to bring down costs, increase volume and develop the supply chain.

Carmakers, too, remain divided and, with the exception of Toyota and Hyundai, few are investing heavily in hydrogen. More recently though, BMW are renewing their interest and see a role for hydrogen-powered cars to fit alongside battery-electric ones.

They plan to launch a small number of BMW iX5 Hydrogen cars around the world from the end of this year for test purposes initially.

"As a versatile energy source, hydrogen has a key role to play on the road to climate neutrality," said Oliver Zipse, Chairman of the Board of Management of BMW AG.

The Stellantis group has also undertaken limited production of commercial hydrogen vans. But not everyone agrees; Mercedes have shelved plans to bring hydrogen fuel cell cars to market as have Audi.

What is the difference between an electric car and a hydrogen car?

To put it simply a battery-electric vehicle is powered by electricity stored in a battery and is recharged by plugging into the electricity grid.

The beauty of a hydrogen car is that you can refill in the time it takes to fill a petrol or diesel car, achieve a similar range and all this while producing zero emissions.

So, why is hydrogen struggling to catch on? Hydrogen comes with a number of challenges; from low efficiency to high costs.

The cleanest way to produce hydrogen is electrolysis, the process of using electricity to split water into hydrogen and oxygen. But it is energy intensive and efficiency is well below 100 per cent.

By the time you transport the hydrogen to a filling station, more loss has occurred and even if you can bypass the transportation stage, the cost of storage is also high.

It is estimated by the time you get on the road and the hydrogen is converted into electricity in the car, only about 38 per cent of the original electricity is used.

The key selling point for hydrogen cars is they can refuel in minutes but despite being the most abundant elements in the universe finding somewhere to fuel a hydrogen car is very difficult.

The initial investment risk of building a hydrogen infrastructure is far too high for a single company so tackling this problem is likely to require planning and coordination that brings together governments, industry and investors.

Hydrogen is highly flammable, difficult to store and poses a safety risk in the event of an accident. However, car makers like Toyota insist that fuel cell electric cars are as safe as conventional vehicles.

The Japanese automaker has spent many years testing hydrogen-powered cars in extreme conditions and temperatures to ensure they can be used safely and reliably.

What hydrogen cars can you buy?

While new electric cars are launching regularly, there are only two hydrogen cars available to buy in Europe; the Hyundai Nexo SUV, and the Toyota Mirai.

Hydrogen cars are also not only expensive to buy but are also costly to refuel. The extent of how much they cost compared to recharging an electric car differs considerably between countries, too.

What does the future hold for hydrogen and electric cars?

The jury is still out as to whether there is a place for both technologies.

BEVs are not without issues; they are expensive to buy and can take a considerable time to recharge.

In addition, electric cars may generate no tailpipe emissions but the battery power sources, the recycling of its components and the manufacture of the vehicles and batteries contribute to carbon emissions. Plus, the mining of many of the raw materials raises both ethical and environmental issues.

But the lack of a hydrogen refuelling infrastructure, the challenges around transporting the fuel and the fact that you need a lot more energy to make a hydrogen vehicle move than a battery electric vehicle means for now, the future is battery electric.

A NASA spacecraft is about to deliberately crash into an asteroid

What are the perks of working for a tech company in Europe?