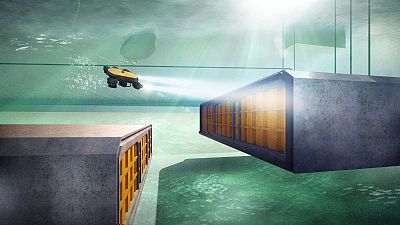 At over 18 km in length, the Fehmarn Belt Fixed Link - the world’s longest underwater rail and road tunnel, which will connect Germany and Denmark - is well underway.

The €10 billion mega project, the largest engineering project ever undertaken in Denmark, is part of the European Commission’s Ten-T programme, which is focusing on strengthening transport links and interconnectivity on the continent.

Highlighting its importance to its overarching ambitions, the EU contributed €1.1 billion to its construction.

When completed in 2029, the journey by rail between Hamburg and Copenhagen will be cut down from 4.5 hours to 2.5 hours and will allow train services to go beyond the Danish border to Sweden, Norway, and Finland.

Amid the fanfare about the promised speed and green credentials of the transport link, some environmentalists have been strongly opposing the construction citing its ecological impacts.

The German environmentalist organisation NABU has voiced its concerns about potential damage to biodiversity in the Fehmarn Belt, an EU-protected area.

However, Femern A/s, the Danish company building the tunnel, says it is confident that "the impacts of construction are temporary".

"Vast areas of new nature will be established as a result of the project. On land, 300 hectares of coastal wetlands will be created, and at sea, we are establishing 42 hectares of new reefs," Henrik Vincentsen, the CEO of Femern A/S, said in a statement to Euronews Next.

Conservationists also question whether this project even fulfils the European Commission’s green ambitions.

"This is not only a road-rail project, but you also have four lanes for cars and trucks. And from what we understand, it’s not really a benefit for a change of transportation in Europe," said Malte Siegert, head of NABU.

"Especially not because Denmark wants to refinance the project with money from the road-traffic," he added.

While environment activists suggest the existing 160 km link is sufficient for current traffic, the construction company is convinced the clear shortcut will benefit both passengers and the climate.

"The tunnel will increase capacity and relieve congestion on the rail and road networks in Denmark, and create significant savings in time, energy, fuel, and CO2 emissions for transit traffic. This is why the European Commission has named the Fehmarnbelt Tunnel a priority project," Vincentsen told Euronews Next.

Has sustainable travel made Gdynia the 'happiest city' in Poland?