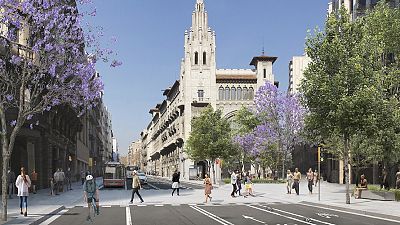 What Barcelona's Via Laietana will look like after its transformation as part of the Superblock project.   -   Copyright  Barcelona City Council
By Gaia Lamperti  •  Updated: 19/09/2022

Inevitably pushed by the behavioural changes following the COVID-19 pandemic, policymakers and urban planners have been increasingly focusing on the creation of environments conducive for walking in recent years.

From the UK government’s £2 billion emergency fund for active mobility to New York City banning cars from certain central streets, during the pandemic we saw major urban centres around the world reallocate space for pedestrians, not only for them to socially distance, but also spend more time outdoors locally, especially during lockdowns.

"The COVID-19 pandemic brought to the mainstream the fundamental needs of urban populations, how and where people spend time in their cities," Richard Lambert, Director at London-based city transport think tank and social enterprise Fare City, told Euronews Next.

"This led to calls to make these temporary changes to how we use space in cities permanent and to address equity issues around the lack of access of many urban populations to open, green and people-friendly space," he added.

During 2020, in England, miles walked per person per year increased by 7 per cent to 220 miles, the highest levels since 2002 according to official statistics form the Department for Transport.

However, even before the start of the pandemic, urban policies towards more sustainable transport systems were already taking place globally, as part of tackling a variety of huge challenges that cities are facing.

Cities contribute 70 per cent of the world’s greenhouse gas emissions, with transport alone being responsible for 21 per cent of them. Shifting to walking and cycling can drastically reduce emissions and is the quickest and most efficient way to decarbonise transport.

In Lambert’s opinion, this will be fundamental to "addressing the challenge of how to create climate resilient and more liveable cities that improve quality of life for the predicted continued rise of urban populations across the world in a changing global climate".

There’s already plenty of examples of major urban centres across the world encouraging dwellers to walk more by investing in ambitious walking schemes.

That is the case of Singapore’s historic Civic District rejuvenation, designed to bring people walk closer to the water. The city, one of the "greenest in the world" according to Lambert, is integrating green mobility corridors dedicated to active travel, like its Park Connector Network.

In Barcelona, the Superblock project has created an area of nine city blocks closed to traffic creating pedestrian-friendly thoroughfares and wide swaths of green space in what Lambert calls a "a great template for the reallocation of space from cars and to people focused around residential and mixed-use blocks".

More European cities like London, Freiburg and Milan, all of which boast efficient public transport systems, are also focusing on allowing greater walkability with ambitious strategies to turn the historic centres car-free.

But truly transforming our cities into more walkable centres does not stop with limiting climate emissions and meeting net-zero targets. It also looks at the impact active travel can have on the quality of life and communities themselves.

"A key part is ensuring that streets and spaces are equally accessible for people of all ages, genders, ethnicities, abilities and socio-economic backgrounds," Lambert explained.

"Integrating people-friendly access and connections with sustainable transport systems and hubs is important to move away from reliance on private modes of transport".

Measures that increase space and priority for people, if delivered with access and inclusion in mind, can provide greater access to the city’s opportunities to the entire population rather than only those who own or can afford private transport.

Last but not least,a city needs to make people want to walk via attractive walking network options, Lambert argues, which encompasses aesthetics and feel of environments, like greenery, safety, noise, temperature, length and so on.

An excellent example of a thoroughly planned and tastefully designed active travel scheme that is bringing tangible improvements to the local community as well as redeveloping the landscape can be found near Cambridge, England.

A masterplan of extensive on and off-site sustainable transport infrastructure, Waterbeach includes a series of waterside walking paths connecting with off-site routes and linking to nearby villages, employment centres and the city of Cambridge itself.

"From establishing a diverse combination of land use that reduces the need to travel, to investing in infrastructure from day one, there are many ways to avoid early car-dependent behaviours, as these habits are much harder to break later on in the life of a scheme," Stina Hokby, Associate Partner at the architecture and urban design studio behind the project, Fletcher Priest Architects, told Euronews Next.

"Walking infrastructure plays a key role, making it easier to choose sustainable forms of transport over the car".

The scheme has been designed with healthy lifestyles in mind, as it incorporates sports amenities, cycle lanes, play areas and 17,000 newly planted trees.

"The whole development supports a health and wellbeing strategy, alongside movement and sustainability agendas for the new and surrounding communities," Hokby commented.

"Active travel is one part of the solution to the health risks due to unhealthy lifestyles," Laura Luukkonen, Senior Advisor at the City of Turku in Finland, told Euronews Next. "But how to get people on walking and cycling instead of driving their cars?".

“Next to issues that occur from too little exercise, like cardiovascular diseases, the tool also took into account the mortality effects of exposure to air pollution and traffic crashes to further assess the effects of motorized travel modes,” she explained.

As a result of the study, the traffic network plan of southwest Finland was updated, positive campaigns about active travel have been launched and the city of Turku pledged to adopt participatory methods in urban planning that can give the residents a sense of belonging and importance.

Active travel has huge benefits for a city’s economy too. Studies show that these include improved urban realm, direct employment and spending, financial savings in the healthcare sector and generalised, inclusive growth.

"People who walk and cycle are more likely to spend more in shops than those who drive,” said Lambert.

"In addition, real estate and property values have been shown to increase when places and streets are more walking-friendly, although this may have impacts on equity of access to living in cities".

That is because areas with lower volumes of traffic are more likely to foster social connections between communities and, therefore, increase perceived levels of liveability.

Most importantly, active travel schemes are one of the most effective uses of space to address issues of inequality and increase social inclusion in the urban environment.

Real estate and property values have been shown to increase when places and streets are more walking-friendly, although this may have impacts on equity of access to living in cities.

Clearly, walking or wheeling can be considered the most equitable forms of mobility, as they are the least expensive and largely free, says Lambert.

"Measures that increase space and priority for people, if delivered with access and inclusion in mind, can provide greater access to the city’s opportunities (education, recreation, jobs etc.) to the entire population rather than only those who own or can afford private transport".

And because it is often the poorest sections of urban populations that currently experience the greatest negative impacts of air pollution and lack of access to sustainable transport options, “it is important that investment in active travel and sustainable transport is prioritised in urban areas that have the lower levels of access currently and also among the communities that can most benefits from it," said Lambert.

"The key is ensuring that spaces and streets in cities that are working to promote active travel are done so with all users and city populations in mind, not just those that currently use the space or travel by that mode," he concluded.