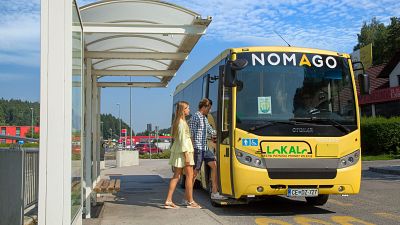 Slovenian city Velenje is one of 50 cities and towns in Europe to offer their residents free public transport   -   Copyright  Photo: Vranič Matej
By Roselyne Min  •  Updated: 17/09/2022

Estonia’s capital Tallinn and Luxembourg are pioneers in Europe for abolishing transport fares on a relatively large scale - at a city level and nationwide respectively.

More than 50 cities and towns in Europe have now introduced free public transport, citing climate ambitions and social equality as their primary motivators.

"Nobody's asking us to pay for every minute or every hour that we spend in a park. So, why not consider public transport as part of that system and part of that social agreement?" he said.

Luxembourg became the first country in the world to scrap fares on all public transport in 2020, something the authorities are proud of.

"When we introduced free public transport, it was the icing on the cake. It's to really push forward the discussion inside the population to really rethink their way, how they move around and really to see what we are doing," the country’s deputy prime minister François Bausch told Euronews Next.

In contrast, city authorities in Tallinn - which has been closely examining its own experiment in offering free transport since it was introduced over 9 years ago - are skeptical that the policy has done much to convince drivers to leave their vehicles at home.

"What we actually saw in Tallinn was that the shift from public transport to cars went up," explained the Estonian Transport Administration’s sustainable mobility expert Mari Jüssi.

What we actually saw in Tallinn was that the shift from public transport to cars went up.

"In nine years’ time, the share of cars has risen from 42 per cent of the trips to 48 per cent now. So, in this kind of sustainable mobility terms, it actually hasn't proven to be effective".

"Families with a lot of schoolchildren save some money during the time during the year. And in some of the regions, some of the county buses are also free since 2018. There we see maybe more positive impacts because there it used to be more expensive, these regional buses," she told Euronews Next.

Even its backers warn free public transport is not a silver bullet to improving sustainable mobility.

Both Jüssi and Keblowski also agree that improving the quality and connections of public transport is a key to attracting more passengers and the free fare policy would be a tool to support the working class.