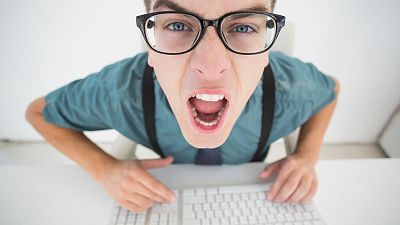 Hate speech online increases if the temperature is outside a person's comfort zone, a new study suggests.   -   Copyright  Canva
By Luke Hurst  •  Updated: 08/09/2022

Temperatures outside of our comfort zone may lead to an increase in online hate speech, a study has found.

A statistical analysis of more than four billion tweets found that temperatures above 30°C lead to an increase in online hate across climate zones and socioeconomic differences, such as income and political preferences.

But it’s not just hot temperatures that get bigots' blood boiling. Temperatures below 12°C were also seen to increase the number of hate messages posted on Twitter.

The research, published in The Lancet Planetary Health and based on tweets from Twitter users in the United States, found that outside of a comfort zone of 12 and 21°C, aggressive online behaviour increased.

The minimum number of hate tweets was recorded at temperatures between 15 and 18°C. Temperatures above 30°C were consistently linked with strong increases in online hate.

"Detecting hate tweets in more than four billion tweets from US users with our AI algorithm and combining them with weather data, we found that both the absolute number and the share of hate tweets rise outside a climate comfort zone: people tend to show a more aggressive online behaviour when it’s either too cold or too hot outside," said Annika Stechemesser, lead author and scientist at the Potsdam Institute for Climate Impact Research (PIK).

The authors state this could have worrying implications for climate change, as we are on course for more extreme weather events and hotter overall temperatures.

Are Europeans susceptible too?

A 2021 study based on the online behaviour of Europeans made similar findings.

It looked at more than 10 million racist tweets from six different countries, across different climate zones between 2012 and 2018.

By studying the daily temperature data in congruence with the tweets, the researchers found the fewest racist tweets for temperatures between 5 and 11°C - temperatures that people are more accustomed to.

Temperatures warmer or colder than those were associated with steep increases in racist abuse online.

Publishing in the journal IOPscience, the authors said their results suggest that future warming could lead to an increase in the frequency and acceptance of racist content online.

In the PIK study of US tweeters, the authors used machine learning to identify 75 million hate tweets in a data set of more than 4 billion tweets posted in the USA between 2014 and 2020.

They then analysed how the number of hate tweets changed as local temperatures increased or decreased.

They used the official UN definition for hate speech, which is discriminatory language with reference to a person or group based on their religion, ethnicity, nationality, race, colour, descent, gender or another identity.

Anders Levermann, a co-author and head of Complexity Science at the Potsdam Institute, said even in high-income areas where people may have air conditioning, an increase in hate speech was seen on "extremely hot days".

"In other words: there is a limit to what people can take," he said.

"Thus, there are likely limits of adaptation to extreme temperatures and these are lower than those set by our mere physiological limits".

The authors say that as extreme temperatures feed online hate, that can then have the knock-on effect of impacting the mental health of victims of that hate.

"Being the target of online hate speech is a serious threat to people’s mental health. The psychological literature tells us that online hate can aggravate mental health conditions especially for young people and marginalised groups," said Stechemesser.

Leonie Wenz, who led the study, added that curbing emissions and reducing the impact of climate change would not only, therefore, benefit the outer world but also our mental health.

"Protecting our climate from excessive global warming is also critical to our mental health," she said.

Having this blood type may increase your risk of stroke