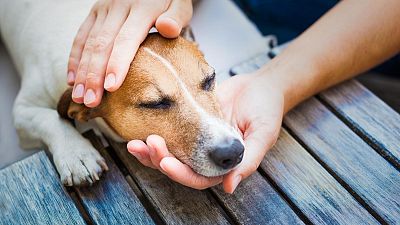 A dog in France caught monkeypox from its owner. Is transmission to our pets something to worry about?   -   Copyright  Canva
By Tim Gallagher  •  Updated: 16/08/2022

A pet dog in France has contracted monkeypox in what is believed to be the first human-pet transmission of the illness, according to a study published by the Lancet medical journal.

The animal, an Italian greyhound, is believed to have caught the virus from sharing a bed with his owners who were infected.

The owners, who are both men who have sex with men (MSM) living in Paris, are partners in a non-exclusive relationship and contracted the monkeypox virus from third-party sexual contact.

The pet, who had been sleeping in the couple’s bed, developed lesions on its skin 12-days after the onset of their symptoms. The animal subsequently tested positive for monkeypox via a PCR test.

The monkeypox epidemic is spreading globally, and in France is mainly contained in the Paris region where this case occurred.

For the first time, the virus is circulating widely outside of central and western African countries where it is endemic.

Cases have been found in North America, Asia, Australia, and Europe where the race is now on to vaccinate the MSM community amongst whom the virus is predominantly spreading.

Monkeypox can be spread through sexual contact but is not a sexually transmitted infection (STI), it is passed on through close contact with sores, large breath droplets, and contact with the clothes and bedding of the infected.

Does this pet transmission represent a new frontier of the monkeypox epidemic? We asked an expert to get an answer.

Can you catch monkeypox from your pet?

Monkeypox is a zoonotic disease meaning it spreads from animals to humans.

In African countries where monkeypox is endemic, it is common for locals to catch monkeypox from rodent scratches. Monkeypox also spreads readily from animal-to-animal and has been contracted by captive primates in Europe from infected imported animals.

The Italian greyhound represents the first recorded case of human-to-animal transmission, and the first case of monkeypox transmission involving a domesticated animal outside of prairie dogs in the US (which are actually rodents) that can be kept as pets.

Should we be concerned?

"This is a single event," Professor Chloe Orkin of Queen Mary University of London, who is the senior author on one of the largest global case series on monkeypox infections in humans, told Euronews Next.

"One cannot generalise from a single case and predict the course of a global outbreak".

It is vital to note that monkeypox is easily transmissible to and between rodent populations.

However, Orkin says there is little evidence prior to this incident that dogs and cats can be easily infected with monkeypox or that the virus can affect other animals that are often kept as pets like insects, reptiles and fish.

This doesn’t mean we shouldn’t be careful.

"It is important to try to prevent domestic animals from infection," said Orkin, citing the dangers of the virus becoming endemic in new countries through animal hosts, although she urged the public not to panic.

"In other countries, monkeys are being killed out of mistaken fear that they may transmit monkeypox. Animal welfare is very important".

How can I protect my pet from monkeypox?

If you contract monkeypox in the future, how best can you protect beloved pets from getting the virus?

Public health advice from the World Health Organization (WHO) is not to sleep with pets, to use gloves when handling them, and to practice careful disinfection if you contract monkeypox.

The best case scenario is to have someone else take care of them during your isolation period. It is also vital to keep any rodents in cages and not to allow them to roam the house as they so easily catch the disease.

Most importantly take steps to seek medical attention from a vet if you think your pet is unwell; however, you should ring ahead to the veterinary clinic to advise about the monkeypox situation.

Prior to this outbreak, there was little evidence that dogs and cats could be infected with monkeypox, and although it is known to spread between rodents, especially in burrows, the reservoir (which is to say the species in which the monkeypox virus survives) has never been identified in western and central Africa.

"This speaks to the scientific neglect and lack of research into diseases that affect people in the Global South," said Orkin.

Are these the 10 most crypto-friendly countries in the world?