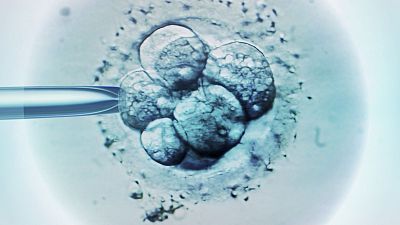 A team of stem cell researchers in Israel was able to create the world’s first synthetic embryos from mice stem cells, a scientific feat that could hold the key to ending animal testing in medical research and offer new solutions to healing people.

The embryos created by the scientists at Rehovot’s Weizmann Institute of Science are “synthetic” because their creation didn’t involve an egg or sperm, or even a mouse’s uterus.

The mouse stem cells - cells that can develop into any organ or tissue - were grown into an artificial womb for eight days, where they developed a rudimentary brain, an intestinal tract, and a beating heart.

After eight days - the equivalent of three months of pregnancy for a mouse - the embryo stopped growing.

The experiment is yet another success in the unfolding race to develop embryos from human and mouse stem cells, which the scientists at Weizmann Institute said could hold the key to understanding how organs develop in the embryos and one day create replacement organs for people who need a transplant.

But the research, published on Monday in the journal Cell, also raises ethical questions which leave many uncomfortable.

As scientists’ ability to turn stem cells into human organs, and even embryos, gets more and more sophisticated and successful, reaching goals that we would have once considered impossible, have we stopped to think about boundaries?

This was the question that the International Society for Stem Cell Research (ISSCR) tried to respond to last year, when it issued new guidelines limiting the cultivation of human embryos in the laboratory to 14 days, before the first signs of the nervous system start appearing. After that, the embryos must be destroyed.

Synthetic human embryos in the future?

The Weizmann Institute’s scientists said the synthetic mouse embryos, despite looking a lot like natural mouse embryos, could not be considered the same, and any attempt made at implanting them into a mouse’s womb did not translate into a pregnancy.

That suggests that, at the moment, mice pups still need to be created the old-fashioned way - egg, sperm, and everything that comes with it.

But the research opens the way to the possibility that one day, mice pups could be created out of any mouse cell. And after that, what’s stopping us from creating human embryos outside of the womb?

The Weizmann Institute’s researchers said their only goal in conducting the experiment was to prove whether it could one day be possible to create synthetic embryos able to grow replacement organs for those in need of a transplant.

"Our goal is not making pregnancy outside the uterus, whether it’s mice or any species," lead researcher Dr Jacob Hanna said, as reported by the Washington Post.

"We are really facing difficulties making organs — and in order to make stem cells become organs, we need to learn how the embryo does that. We started with this because the uterus is a black box — it is not transparent".

Hanna has created his own company, Renewal Bio, aiming to grow human synthetic embryos that will provide tissues and cells for transplants and replacements.