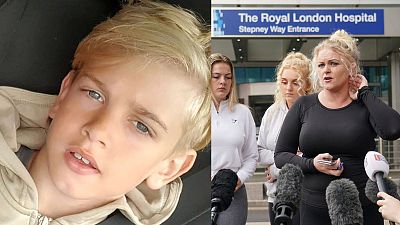 A handout, undated photo of Archie Battersbee next to a photo of his mother Hollie Dance outside of the hospital where the boy is treated.   -   Copyright  Hollie Dance via AP and Dominic Lipinski/PA via AP
By Giulia Carbonaro  •  Updated: 04/08/2022

On April 7, Hollie Dance got back to her home in Essex, UK, to find her 12-year-old son Archie Battersbee unconscious, a ligature over his head.

She believes the boy was taking part in an online challenge, but there’s no way of knowing for sure as Archie never regained consciousness.

In fact, his doctors say the boy, a keen gymnast and a boxer passionate about mixed martial arts, suffered a catastrophic brain injury and has no chance of recovery.

They suggested ending the treatment that’s now keeping Archie’s heart beating, but the boy’s parents are fighting back against the doctors’ advice, demanding their son be allowed to be kept on a ventilator and feeding tube.

Disagreements between doctors and a patient’s families are rare when it comes to deciding whether to end life support for children, and the case of Archie Battersbee has stirred a debate about who has the right to take these extremely tough decisions and how we distinguish death from life.

How to decide when to end life support?

“The medical profession has a professional, ethical and legal duty to treat patients in their best interests,” Mark Bratton, an expert on medical ethics and law teaching at the University of Warwick Medical School, told Euronews Next.

“And the courts have defined best interests very widely to include a person's welfare, which is not just a medical matter, but also a psychological, emotional and even a spiritual matter.

“When patients can decide for themselves, there's no problem because the patient makes a decision and the doctors have to treat them in their best interests. In the case of children, it's complicated by the fact that parents are deeply involved - as they should be - and parents are assumed to be good judges of their children's best interests, and therefore, a great deal of weight is given to the opinions of parents. But the rights of parents are not absolute”.

In the case of Archie Battersbee, the doctors’ decision clashes with the boy’s parents’ choice to give their son more time. So who decides in this case?

“Where there is an impasse, the only way of resolving the disagreement is by bringing the case forward to the court, who, as a neutral arbiter, focuses exclusively on the best interests of the patient,” said Bratton.

In the case of Archie, all court hearings so far have concluded that life-sustaining treatment should be withdrawn because it's not an option in the boy’s best interests to continue it.

“Life-sustaining treatment represents a harm of some sort to Archie because it is very invasive,” said Bratton, who’s also the Bishop of Coventry's advisor on Medical Ethics.

“There's no realistic prospect of recovery. He's catastrophically damaged and that it is in his best interests to withdraw the ventilation,” he added.

“In the very first High Court judgement, which was decided by Mrs Justice Arbuthnot, she took the view that Archie's mother, Holly Dance, in particular, was taking an unrealistic view about its condition.

“All the judges have been very sympathetic towards Archie's family's plight. It is unimaginable. And they can only express the deepest sympathy. But at the end of the day, they have a very clear legal principle to follow and apply. And for all the judges in all the court cases that are pointed in one direction, that life-sustaining treatment should be withdrawn”.

Archie’s case has brought forward a profoundly uncomfortable, and disturbing question: is the boy even alive, or is he already dead?

Death and life seem pretty definite, opposing terms, and yet even in medicine, the concepts are not so clearly - or unanimously - defined.

In the UK, death is defined as being when someone is recognised as brain dead. But in Archie’s case, despite the boy being unconscious and said to be unable to one day recover from a catastrophic lack of oxygen his brain, this diagnosis could not be made clear.

“One of the complexities of Archie Battersbee's case, which was reflected in the first High Court judgement, is the definition of death,” said Bratton.

“Now, in our jurisdiction, this is not a matter dictated by law, but dictated by long-established medical practice. You are considered dead if the various criteria for a diagnosis of brain stem death have been met.

“The difficulty in Archie Battersbee's case is that, for various reasons, they couldn't apply the diagnostic test for brain stem death. Mrs Justice Arbuthnot decided that notwithstanding the inability to apply that test, nevertheless, the preponderance of medical evidence suggested to a preponderant degree of likelihood that he was probably, in fact, brain stem dead,” Bratton added.

“That was the first part. But she then went on to say that, if he isn't, in fact, brain stem dead, then his best interests dictate that life-sustaining treatment should be withdrawn. This was appealed to the Court of Appeal, and the Court of Appeal said that she was wrong to make that determination of brainstem death, given the lack of an ability to apply the requisite diagnostic test”.

According to court reports, Justice Arbuthnot found that Archie died at noon on May 31 2022, shortly after the MRI scans taken that same day led doctors to conclude that the boy’s brain stem function had irreversibly stopped.

“But because she had not applied the right standard of proof, which they felt should have been beyond a reasonable doubt rather than on the balance of probabilities, the result was that they remitted the case back to the High Court for reconsideration, but under the jurisdiction of a different judge, Mr Justice Heydon,” said Bratton.

In this appeal case, Justice Heydon also ruled that doctors could lawfully terminate Archie’s life support treatment in the boy’s best interest, mentioning how his lack of brain activity was causing some of his other organs to fail, and saying that the boy in the hospital bed was no longer the same as the lively boy in the photos before his injury shared by the media.

“You've got this ethical complexity about whether you're prolonging life or prolonging death,” said Bratton.

"Now, Archie's mother believes that there is scope to prolong his life because she believes, contrary to the vast weight of medical evidence, that Archie's condition is stable and therefore there is scope for waiting and seeing.

“But the medical experts are saying it isn't stable and that he will inevitably die, sooner or later - and by later, not much later. Because his body is basically closing down”.

The withdrawal of Archie’s treatment was expected to happen on Wednesday morning, but it was once again postponed by a new appeal by Archie’s parents to keep him "alive," an appeal made this time to the European Court of Human Rights.

However, on Wednesday evening, the court declined to hear the case, saying it would “interfere with the decisions of the national courts to allow the withdrawal of life-sustaining treatment from (Archie) to proceed".

"It’s all very upsetting, and one's heart can only go out to the parents faced with an appalling predicament, which one wouldn't wish on anybody. But of course, when you're in that situation, you're not necessarily in a position to see things objectively," Bratton said.

"And there are mechanisms in society for neutral decision making, which, while taking account of the feelings of all the parties concerned, focuses on the central issue, which is: what is in Archie's best interests to do?"