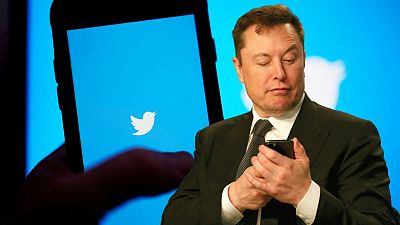 Elon Musk says he's pulling out of his $44 billion (€43.2 billon) deal to buy Twitter, arguing that "multiple provisions" of the agreement have been breached.   -   Copyright  Composite image - AP Photos by John Raoux and Gregory Bull
By Euronews  with AP & Reuters  •  Updated: 14/07/2022

Elon Musk announced on Friday he was terminating his $44 billion (€43.2 billion) deal to buy Twitter, saying "multiple provisions" of the agreement had been breached.

The world's richest man wrote in a regulatory filing that the social media company had failed to provide information about fake or spam accounts on its platform.

The terms of the deal require Musk to pay a $1 billion (€981 million) break-up fee if he does not complete the transaction. But Twitter is already saying it will fight in court to enforce it.

The chair of Twitter's board, Bret Taylor, tweeted in response that the board is “committed to closing the transaction on the price and terms agreed upon with Mr Musk and plans to pursue legal action to enforce the merger agreement".

"We are confident we will prevail in the Delaware Court of Chancery,” Taylor added.

The news is the latest twist in a weeks-long will-he-won't-he saga that saw the billionaire CEO of Tesla and SpaceX publicly accuse Twitter of underestimating the numbers of fake or spam accounts, which are key to the company's business performance.

In a letter to the Securities and Exchange Commission, Musk said Twitter had “not complied with its contractual obligations” surrounding the deal, namely giving him enough information to “make an independent assessment of the prevalence of fake or spam accounts on Twitter’s platform”.

Much of the takeover drama has played out on Twitter, with Musk – who has more than 95 million followers – also repeatedly lamenting that the company was failing to live up to its potential as a platform for free speech.

Musk had previously threatened to walk away from the deal if Twitter couldn't show that less than 5 per cent of its daily active users are automated spam accounts.

He argued, without presenting evidence, that Twitter has significantly underestimated the number of these “spam bots” – automated accounts that typically promote scams and spread misinformation – on its service.

During a call with executives on Thursday, Twitter said it removes 1 million spam accounts each day, and that these account for well below 5 per cent of its active user base each quarter.

To calculate how many accounts are malicious spam, Twitter said it reviews “thousands of accounts” sampled at random, using both public and private data such as IP addresses, phone numbers, geolocation and how the account behaves when it is active, to determine whether an account is real.

Fake social media accounts have been problematic for years. Advertisers rely on the number of users provided by social media platforms to determine where they will spend money.

The highs and lows of Elon Musk