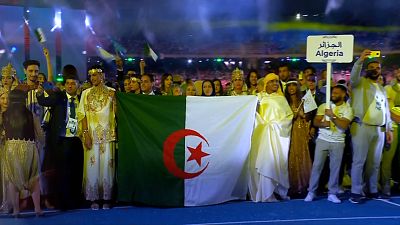 The first time the Mediterranean Games were hosted in Algeria was in 1975, in the capital, Algiers.

Now, after 47 years, the games are back on Algerian soil, with the 19th edition taking place in Oran.

The multisport event, which began on 25th June, brings together more than 3000 athletes from 26 countries of the Mediterranean region. The celebrations began at the magnificent Olympic stadium in Algeria's second largest city. The venue welcomed 40,000 lucky people, who were able to watch the opening ceremony of the Games in all their splendor.

Tens of thousands of people also took to the streets to take part in this highly anticipated event, and to welcome the visitors from Africa and Europe.

"I am from Oran and I came especially from Warsaw in Poland to attend the Games”, shares a visitor.

As for a young woman, she shares that hosting the games goes beyond sport: "It's a pride for us in Oran and for Algeria to host these Mediterranean Games. It's great!"

To mark the return of the games to Algeria, a sumptuous opening ceremony was staged, with hundreds of artists, musicians and dancers. Two hours of entertainment with a bombastic fireworks show, celebrating Algeria's landscapes, its history, and its influence in the Mediterranean region.

The delegations of the 26 participating countries paraded in a lively atmosphere, which was a cause of real joy.

As per the custom, the Greek delegation, which traditionally represents the cradle of the Olympic Games, was the first to enter the athletics track. The Algerian delegation was welcomed by a standing ovation from the public.

Among the athletes was flag-bearer Imane Kehlif, the boxer who is holds the title of vice-world champion in the super lightweight category. The ceremony and flag-bearing duties was a source of pride for the young athlete, who has already made her mark on the history of women's boxing in her country. In May 2022, she became the first Algerian woman to play in a World Championship final.

"I am very happy and proud to see my country hosting these Mediterranean Games”, the 23-year-old boxer shared. “I can tell you that the whole Mediterranean basin is in my country. As athletes, we feel like one family… We athletes of the basin, coming from Italy, Spain, Egypt, Tunisia... All these countries form one country."

There is great diversity among the people of the Mediterranean, but there is also a great unity, and sport becomes a red thread that unites young people.

Unity. This is the motto of these Games, which bring together three continents: Africa, Asia and Europe. A multisport competition second only to the Olympic Games, where different cultures, religions, and languages come together.

The key is sharing, as the president of the International Committee of the Mediterranean Games (CIJM), Davide Tizzano explains: "There is great diversity among the people of the Mediterranean, but there is also a great unity, and sport becomes a red thread that unites young people. So, important values, which are the pillars of the sports movement, stand out: being together, getting to know new cultures, mixing with other cultures, and understanding that there is no such thing as a world of one's own and that everything revolves around us, but rather that there are several worlds. Each one has its own, and we must therefore integrate them".

For 12 days, the athletes are living in a “Mediterranean village”, created for the occasion and spread over 39 hectares, a few kilometers outside of Oran. Inside the village, they sleep, eat and also train. Each nation has its own building, but bumping into each other in the streets of the village allows young athletes to get to know one another and create bonds that go beyond different cultures and traditions.

"We all want to win on the day of the competition, but in the end we all embrace and respect each other, and that is the real victory”, says Luigi Busà, Italian karateka, flag-bearer, and Olympic champion in Tokyo 2020. “Because at some point, sporting life passes, but the human relationships with the people you fought with on the tatami or on the ring or elsewhere remain. And this is what we must perpetuate for the future generation.”

The sporting event takes place in 37 venues, scattered in and around the city. Some are brand new and others have been refurbished for competitions and training sessions. The work has taken years, and the result seems to have left everyone satisfied, as French volleyball player and flag-bearer Luka Basic can attest.

"It's true that compared to the other competitions we are used to as volleyball players, the organization is different", he confesses. "But we are really satisfied for the moment to be here. We're looking forward to discovering everything, to have fun, to make people have fun through sport, and that's what we're going to try to do”.

The Mediterranean Games continue in Oran until the 6th July.