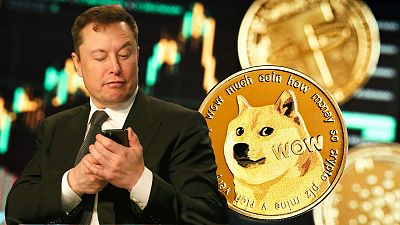 SpaceX, Tesla and their CEO are being sued for $258 billion (€245 billion) over claims they were part of a scam to “manipulate” the value of the cryptocurrency for profit.   -   Copyright  Composite image: AP/Canva
By Euronews  with Reuters  •  Updated: 17/06/2022

Tesla and SpaceX CEO Elon Musk is being sued for $258 billion (€245 billion) by a Dogecoin investor who accuses him of running a pyramid scheme to support the cryptocurrency.

In a complaint filed in federal court in Manhattan on Thursday, plaintiff Keith Johnson accused Musk, the electric carmaker and the space tourism company of racketeering for touting Dogecoin and driving up its price, only to then let the price tumble.

"Defendants were aware since 2019 that Dogecoin had no value yet promoted Dogecoin to profit from its trading," the complaint said.

"Musk used his pedestal as World's Richest man to operate and manipulate the Dogecoin Pyramid Scheme for profit, exposure and amusement".

The complaint also aggregates comments from Warren Buffett, Bill Gates and others questioning the value of cryptocurrency.

Tesla, SpaceX and a lawyer for Musk did not immediately respond to requests for comment.

A lawyer for Johnson did not immediately respond to requests for comment on what specific evidence his client has or expects to have that proves Dogecoin is worthless and the defendants ran a pyramid scheme.

Johnson is seeking $86 billion (€81.7 billion) in damages, representing the decline in Dogecoin's market value since May 2021, and wants it tripled.

He also wants to block Musk and his companies from promoting Dogecoin and a judge to declare that trading Dogecoin is gambling under federal and New York law.

Musk's tweets on Dogecoin, including one where he called it the "people's crypto", have turned the once-obscure digital currency, which began as a social media joke, into a speculator's dream.

In February 2021, Tesla said it had bought $1.5 billion (€1.43 billion) of Bitcoin and for a short time accepted it as payment for vehicles.

Shortly after he became Twitter's biggest shareholder in April, Musk suggested a raft of changes to the social media giant's Twitter Blue premium subscription service, including giving users an option to pay in Dogecoin.

Musk spooks markets with his ‘super bad feeling' about the economy